Made in China: Ensuring Everyone Gets Paid Less 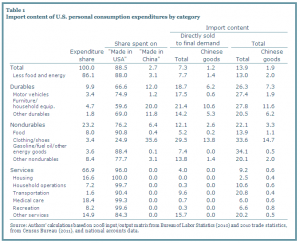 The San Francisco Federal Reserve has a report showing that we don’t really import all that much from China (this, in spite of yesterday’s report that our trade deficit rose again last month). It manages to make the claim by tracking not the volume of all the stuff we use, but the percentage of the ultimate amount of money we spend on that stuff. That calculation shows that just 2.7% of what we spend goes to China.

Here’s how that works:

Obviously, if a pair of sneakers made in China costs $70 in the United States, not all of that retail price goes to the Chinese manufacturer. In fact, the bulk of the retail price pays for transportation of the sneakers in the United States, rent for the store where they are sold, profits for shareholders of the U.S. retailer, and the cost of marketing the sneakers. These costs include the salaries, wages, and benefits paid to the U.S. workers and managers who staff these operations.

Table 1 shows that, of the 11.5% of U.S. consumer spending that goes for goods and services produced abroad, 7.3% reflects the cost of imports. The remaining 4.2% goes for U.S. transportation, wholesale, and retail activities. Thus, 36% of the price U.S. consumers pay for imported goods actually goes to U.S. companies and workers.

This U.S. fraction is much higher for imports from China. Whereas goods labeled “Made in China” make up 2.7% of U.S. consumer spending, only 1.2% actually reflects the cost of the imported goods. Thus, on average, of every dollar spent on an item labeled “Made in China,” 55 cents go for services produced in the United States. In other words, the U.S. content of “Made in China” is about 55%. The fact that the U.S. content of Chinese goods is much higher than for imports as a whole is mainly due to higher retail and wholesale margins on consumer electronics and clothing than on most other goods and services.

There’s another way of thinking of this, though: it basically means we don’t pay the Chinese teenagers who make our sneakers very much.

We knew that–that’s the whole point of producing stuff in China!

That allows the companies importing goods from China to spend money, instead, on marketing and shipping and sales. So rather than make sneakers at a US plant, a working class American is left with a job in a big box store selling sneakers made for pennies by someone in China.

Mind you, that still means this whole process leaves room for jobs for those who design the products Made in China, people like engineers, and for B-School grads who manage the logistics of all this. But much of the jobs left for the unskilled workers are low wage.

Now, the process by which increasing amounts of money are spent on marketing and transportation is not just happening in the areas where we do import from China: clothing, cars, and furniture.

The same process is happening in the one area where we still largely produce for ourselves: food. The USDA recently recalculated how much of our food dollar goes where. And while the results aren’t as stark as the Chinese example–American farmers are still making a bigger chunk of what you spend on food than Chinese workers make from your $70 sneakers–the numbers are still pretty striking. 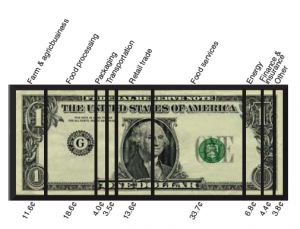 Interestingly, one thing seems to be fairly consistent across these measures. 6.6% of our spending on imported goods go to imported oil.

Imported oil, which makes up a large part of the production costs of the “gasoline, fuel oil, and other energy goods” and “transportation” categories, is the main contributor to this 6.6 percentage point difference.

And 6.8% of the American food dollar goes to energy.

This series indicates that payments from each food dollar going to the energy industry group approached 7 cents in 2008, an increase of 75 percent since 1998.

I compare the food dollar to our “China dollar” not just because it illustrates how much of our spending supports relatively non-productive roles. But also because it provides a way to understand the alternative.

Mr. EW and I spend a lot on eating out (though we frequent restaurants that locally source food). But of what I spend on food directly, the bulk of it goes right to a farmer that lives within 30 miles of me–these women, this family and this family, for example. Of course, that means I have to actually cook to make dinner. But it also means my money stays in my community rather than paying Saudis for oil.

There are some goods it makes sense to outsource. And I don’t begrudge Chinese workers for the pennies they’re making off manufacturing consumer goods for Americans. But at some level the logic of spending all that money on marketing and oil rather than on actually making things defies reason.