The Freddie Mac/Bank of America Settlement: Billions of Reasons to Actually Investigate the Loans 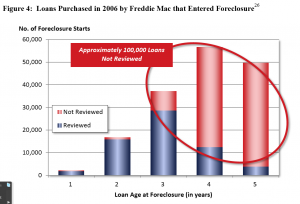 As Gretchen Morgenson tells it, the headline story from an FHFA Inspector General report on a $1.35B deal Freddie Mac made last year with Bank of America is that the analysis behind the deal was flawed.

Freddie Mac used a flawed analysis when it accepted $1.35 billion from Bank of America to settle claims that the bank misled it about loans purchased during the mortgage boom, according to an oversight report scheduled for release on Tuesday.

The faulty methodology significantly increased the probable losses in Freddie Mac’s portfolio of loans, according to the report, prepared by the inspector general of the Federal Housing Finance Agency, which oversees the company.

It’s not until the 11th paragraph that Morgenson reveals the underlying issue: Freddie Mac  refused to examine whether certain later-defaulting mortgages with unpaid principal amounting to $50 billion–ones originated during the peak of the housing boom–were defaulting because of bank representation and warranties defects before it settled with Bank of America. While it’s unclear how many of the 300,000 loans in this category were Countrywide loans covered in the settlement, of the Countrywide loans Freddie did review, they made buy back requests on 24% of them. So this might represent several billion in problem loans they didn’t make BoA buy back.

Back in March 2010, a senior examiner noted that a bunch of mortgages originated during the 2005-2007 period, when Option ARM and Interest Only mortgages were popular, were defaulting later than traditional mortgages–3-5 years after origination rather than during the first 3 years. He posited that the later default date might be because teaser rates were only beginning to end at that point, meaning that mortgages that had affordable for the first 3 years would become unaffordable after reset, leading to default.

[I]t would be reasonable to assume that many of the borrowers, faced with significantly increasing payments in the near term and very little equity in their home, made the decision to default before their [payments reset to higher levels]. It would also be reasonable to assume that the stated income and stated asset underwriting requirement played a role, but neither assumption can be tested without a review of the loans.

He raised this possibility with his supervisors and later, with Freddie’s senior managers, suggesting they review these later loans to test his theory (they attributed the atypical default pattern to falling house prices). Doing so was important, the senior examiner argued, because at that point Freddie only reviewed loans that had defaulted by the 2-year mark for reps and warranties defects.

In effect, Freddie might be exempting a whole class of the most exotic mortgages from reps and warranties review because they didn’t default until after Freddie’s review process stopped tracking them.

As an FHFA memo made clear, Freddie wasn’t reviewing for defects 93% of the loans originated in 2005-6 that had defaulted in the first half of 2010 (the graphic above shows the portion of loans that weren’t examined).

In response to the senior examiner’s concerns, in June 2010, a Freddie senior manager (someone who would report to Freddie’s CEO) agreed to do a review of these loans. But then, weeks later, a different senior Freddie manager stated he was “vehemently against looking at more loans.” That senior manager offered no justification, though others thought such an examination would make little difference and that doing the investigation might lose Freddie BoA’s business.

The senior examiner kept raising this issue–to at least 12 different FHFA people, including Acting Director Edward DeMarco. And when Freddie’s internal auditors reviewed the proposed settlement with BoA–which effectively settled all outstanding reps and warranties issues pertaining to Countrywide–they raised this sampling issue, too, and recommended Freddie do a sampling to see what might be included in these other loans. Because they were rushing to close the BoA deal, Freddie looked at a non-representative sample of mortgages (these came from all originators, not just Countrywide, which had a much higher defect rate than other banks) and declared everything kosher.

So to review: a senior examiner found $50B worth of defaulted mortgages that Freddie had not examined for reps and warranties and raised a plausible reason they might want to do so. Freddie agreed, then refused, to do so. Then, as Freddie was rushing through this BoA deal last December, Freddie’s auditors suggested they might want to check their math on these loans, so Freddie checked their math on a completely different set of mortgages. In spite of having a 6-month warning that up to $50B worth of loans might be a problem, Freddie signed away any BoA liability for good for the piddling price of $1.35B.

Of course, Tom Miller–with his $7.8B servicing deal with BoA–and Bank of New York Mellon–with their $8.5B investors deal with BoA–are trying to do this again. They’re rushing through settlements without taking the time to actually investigate the loan level data to see what the settlement should actually be. As the FHFA IG noted in its report,

Regardless of the cause of these defaults, the search for representations and warranties defects is the point of the loan review process; and if the search does not begin, then the defects will not be found.

Like Tom Miller and BNYM, Freddie was “vehemently opposed” to actually examine what they were settling with BoA on. And while we don’t know the cost, we might start calculating that amount in the billions.

And in the case of the possible bailout Freddie gave BoA because it refused to look at the loans, US taxpayers paid the bill.

Update: I originally conflated the amount of total loans that Freddie hasn’t been reviewing–$50B–with the amount of Countrywide loans in question. For other banks, Freddie should be able to do the analysis and make buyback requests for these exotic loans.