“The Patriot Act, which the president signed into law on October 2001” 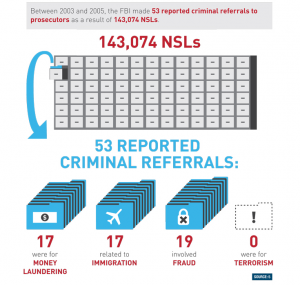 I only noticed two things that might generously be considered typos (as opposed to outright falsehoods or lies of omission) in Dick Cheney’s entire infernal tome. There’s this reference to an October 10, 2002 speech from Jello Jay Rockefeller in support of the Iraq war:

One of the most eloquent statements of the necessity of removing Saddam came from Senator Jay Rockefeller, the vice chairman of the Senate Intelligence Committee. (393)

With sadness, I predict we will live to regret this day, Oct. 10, 2002, the day we stood by and we allowed these terrorist organizations to continue growing in the shadows.

This timid resolution, I fear, will only increase the chance of Americans being killed, and that is not a burden of probability that I am prepared to take. Therefore I will vote no.

Yeah, Cheney’s misattribution probably wasn’t a typo, but instead a cynical attempt to pretend that the Democrat who had reviewed the intelligence behind the war most closely had backed the war, rather than correctly predicted it would heighten the threat of terrorism.

But I don’t think the grammatical error in the following passage, describing the relationship between Cheney’s illegal wiretap program and the PATRIOT Act (which turns 10 today), is really a typo either.

One of the first efforts we undertook after 9/11 to strengthen the country’s defenses was securing passage of the Patriot Act, which the president signed into law on October 2001.

Thus begins the passage in which Cheney describes the genesis of his illegal wiretap program. Of course, the passage should either say, “which the president signed into law on October 26, 2001,” or “which the president signed into law in October 2001.”
A minor point, but one that might suggest Cheney once had the date in there and then took it out.

You see, including the actual date would have really disrupted Cheney’s narrative, which suggests Congress passed the PATRIOT Act and only then did he begin thinking about how to use NSA to fight terrorism, which (implicitly) is why he didn’t include the illegal program in PATRIOT. After a description of how PATRIOT broke down the wall between intelligence and law enforcement in the first paragraph, Cheney continues,

I also thought it important to be sure the National Security Agency, or NSA, which is responsible for collecting intelligence about the communications of America’s adversaries, was doing everything possible to track the conversations of terrorists, so I asked George Tenet whether the NSA had all the authorities it needed. Tenet said he would check with General Mike Hayden, who was then director, and a short time later both of them came to see me in my office in the White House. Hayden explained that he had already made adjustments in the way NSA was collecting intelligence. Those adjustments were possible within NSA’s existing authorities, but additional authorities were needed in order to improve the coverage and effectiveness of the program.

A few paragraphs later, he continued.

With [Bush’s] approval, I asked Dave Addington to work with General Hayden and the president’s counsel, Alberto Gonzales, to develop a legal process by which we could ensure the NSA got the authorizations Hayden needed.

It’s only five paragraphs after Cheney’s description of PATRIOT that he provides the date that–had he actually included the date of the PATRIOT Act–would have made clear that the illegal program started before the signing of the PATRIOT Act.

On October 4, 2001, the president, on the recommendation of the director of central intelligence and the secretary of defense, which the determination of the attorney general that it was lawful to do so, authorized the program for the first time.

Of course, Cheney leaves out some key details along the way, such as that Hayden briefed the House Intelligence Committee about what he was already doing on October 1, which elicited some questions from Nancy Pelosi, then the Ranking Member on HPSCI. Cheney doesn’t mention that Bush clamped down on briefing Congress on October 5. And he doesn’t mention that Pelosi raised questions about minimization, in writing, on October 11, but never got answers to those questions.

Cheney also doesn’t mention that David Kris, who was busy drafting the PATRIOT Act, got an OLC opinion on September 25 approving the one change to FISA he deemed necessary to make with the PATRIOT.

To reveal those details–the briefings to Congress, Pelosi’s questions, Kris’ ability to get FISA changed under PATRIOT–would have made it clear that the rest of the “legal approval” process Cheney describes could have–should have–instead been done with Congress as part of the PATRIOT Act. I may be nitpicking here, writing an absurdly long post about Cheney’s use of the wrong preposition. But Cheney’s choice to bypass Congress even as it was making changes to FISA remains the biggest piece of evidence that he knew he was engaging in an illegal program that Congress would not entirely approve.

There will be a number of retrospectives in “honor” of PATRIOT Act’s birthday today. ACLU’s got a nifty infographic (the image above is just one part of it).

But ACLU’s other “tribute” to the PATRIOT–a lawsuit to force the government to reveal its secret interpretation of PATRIOT Act–and Cheney’s typographical tell that he recognizes he deliberately chose not to get Congressional approval for the illegal wiretap program are even more important.

As horrible as the PATRIOT Act is, after all, both the Bush Administration and the Obama Administration have exceeded the plain meaning of the act. For ten years, then, it has not been enough that Congress has eagerly dealt away our civil liberties. But the Executive Branch will take even what Congress won’t give.

tweets from our circle
Jim White@JimWhiteGNVBiden would be, at best, a mediocre president with many flaws. But that would represent such a vast improvement ove… twitter.com/i/web/status/1…26 minutes ago25 May 2020
emptywheel@emptywheelArea man who wrote REALLY LONG story-tale about Flynn that is significantly inconsistent with the public record dec… twitter.com/i/web/status/1…55 minutes ago25 May 2020
emptywheel@emptywheelIt'd be really helpful if Google added a "flood" feature to their maps so you could figure out whether your hoped f… twitter.com/i/web/status/1…1 hour ago25 May 2020
Jim White@JimWhiteGNVWait. What? Knoller doing a fact check? Well, I'll be! What's the world coming to? Baby steps. But welcome. twitter.com/markknoller/st…1 hour ago25 May 2020
bmaz@bmazRT @MagentaRocks: @bmaz The jokes in my head right now… new meaning to the phrase “baptism by fire” super-soaker Sunday8 hours ago25 May 2020
Jim White@JimWhiteGNVRT @Laurie_Garrett: There is absolutely NO evidence that this is true. The Wuhan strain was already in Calif. & Wash State before the China…16 hours ago24 May 2020
Jim White@JimWhiteGNVRT @atrupar: A woman raises her middle finger at Trump's motorcade as it passes through Sterling, Virginia, on its way to the Trump Nationa…16 hours ago24 May 2020
Ed Walker 🍞🌹@MasaccioEWRT @emptywheel: Special Trash Talk: Frank Zappa and Opera Chorus. Really. emptywheel.net/2020/05/23/spe… From @MasaccioEW. A real treat!2 days ago23 May 2020
Ed Walker 🍞🌹@MasaccioEWRT @EricTopol: If only we had better #COVID19 testing that was rapid, point-of-test, home use, accurate, cheap, worked like a pregnancy tes…2 days ago23 May 2020
RayneToday@raynetodayYou know why. It's qwhite obvious. twitter.com/annmariepoli/s…2 days ago23 May 2020
RayneToday@raynetodayI don't want to open this NYT piece. I'd love to know if "hit with COVID-19" means deaths versus confirmed cases an… twitter.com/i/web/status/1…2 days ago23 May 2020
RayneToday@raynetodayRT @SenGaryPeters: National guardsmen in #MI have put themselves at risk during this crisis. Forcing MI’s guardsmen to end their mission *…3 days ago22 May 2020
Ten Years Ago, Anthrax Attacks–and Judy Miller–Had Huge Effect on... DOJ’s “New” FOIA Rule Just Attempt to Formalize Practice They’ve...
Scroll to top