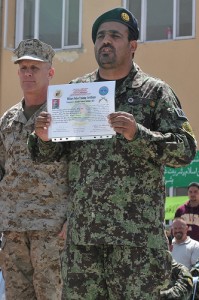 We will dismiss the CIA denial out of hand: documentation of CIA torture practices and the CIA’s attempts to have DOJ provide legal cover for them now fills many books. However, JSOC involvement in torture is less well-documented despite the fact that JSOC torture played a central, but under-reported, role in David Petraeus’ COIN strategy as implemented in both Iraq and Afghanistan.  Petraeus’ primary operative in implementing the torture strategy in both countries was Stanley McChrystal.

First, note that the worst Afghan torture facility, Department 124, “was sealed off from the outside world” to the point that the ICRC was denied access.  Gosh, that sounds familiar:

In 2006, Human Rights Watch released a major report based on dozens of interviews with soldiers who had witnessed the interrogation of prisoners in Iraq. “No Blood, No Foul” revealed that the elite forces conducting the interrogations at Camp Nama and two other locations, known (among other names) as Task Force 121, committed systematic abuse of prisoners at other facilities across Iraq, leading to at least three deaths. Whether or not he was present during the actual abuse — and it seems unlikely that he would need or want to put himself in that exposed position — as commander of JSOC, Stanley McChrystal oversaw them.

Let’s look a little more at the operations of Task Force 121:

The only thing Jeff knew about Camp Nama was that he’d be able to wear civilian clothes and interrogate “high value” prisoners. In order to get to the second step, he had to go through hours of psychological tests to ensure his fitness for the job.

Nama, it is said, stood for Nasty Ass Military Area. Jeff says there was a maverick, high-speed feeling to the place. Some of the interrogators had beards and long hair and everyone used only first names, even the officers. “When you ask somebody their name, they don’t offer up the last name,” Jeff says. “When they gave you their name it probably wasn’t their real name anyway.”

It was a point of pride that the Red Cross would never be allowed in the door, Jeff says. This is important because it defied the Geneva Conventions, which require that the Red Cross have access to military prisons. “Once, somebody brought it up with the colonel. ‘Will they ever be allowed in here?’ And he said absolutely not. He had this directly from General McChrystal and the Pentagon that there’s no way that the Red Cross could get in — they won’t have access and they never will. This facility was completely closed off to anybody investigating, even Army investigators.”

Look back at the photo at the top of this post.  That’s Robert Harward on the left after having just awarded a spiffy ink-jet-printed certificate to Brig. Gen. Saffiullah, Afghan National Army Military Police Brigade commander.  This ceremony took place in April, 2010, in preparation for the US handing over responsibility for the shiny new detention center at Parwan that the US built to divert attention from facilities like its own secret facility at Bagram Air Base.  From all appearances in the spotty reports available to us, Department 124 for the Afghans would appear to be their equivalent of the secret US site at Bagram.

Just before this certificate ceremony took place, I wrote about a particularly insidious bit of media manipulation by the US.  AFP had reported (the link in my post no longer works):

As the NATO commander, the only forces not under McChrystal’s control will be a special US task force that handles detainees, the small number of special operations forces and some support troops from other nations, the official said.

I doubted this statement from the moment I saw it.  I knew that McChrystal’s involvement in detention was central to Petreaeus’ (who was then head of US Central Command) plans for “calming” Afghanistan in the same way he had “calmed” Iraq by imprisoning thousands of innocent Iraqi civilians and instituting a program of torture.  After a bit of digging, I was able to get clarification from a Central Command spokesman:

The AFP story is not inaccurate, but it is incomplete in its explanation of Gen. McChrystal’s authorities. The story says that “as the NATO commander,” the detainee operations task force is not under his control. While that’s accurate, it does not explain Gen. McChrystal’s dual-hatted role as Commander, ISAF, and Commander of US Forces in Afghanistan (COMUSFOR-A). The latter includes forces serving under the Operation Enduring Freedom mission, which is separate from the NATO/ISAF mission.

It appears that Central Command was willing to allow a deceptive portrayal of McChrystal’s role in detention operations to sit without clarification until I pressed them further.  This is not surprising, since the Esquire and other reports on McChrystal’s involvement with torture in Iraq were already published and there was a push to put public-relations friendly patina on US efforts in Afghanistan.

Here is how I described the certificate ceremony:

So it appears that the shell game has progressed to one prison already being handed over to Afghan control. With Saffiullah now in possession of his full color Military Police Training Certificate, he and his brigade are nearly ready to take over control of another prison. Somehow, I doubt that these changes will result in any improvements in the process for Afghan citizens who have been detained to obtain a hearing on whether they were properly arrested.

Sadly, my biggest concern at the time was over the possibility that large numbers of innocent civilians would be held in the Afghan-run prisons without a chance for a hearing on whether they were properly detained.  Now we know that torture should have been an even bigger concern.

Given the documented history of JSOC personnel training Afghan detention personnel and the strong parallels in the worst abuses taking place at JSOC and Afghan facilities, the JSOC denial that they were aware of torture at Department 124 lacks all credibility.  Not only would JSOC be aware of these practices, they likely were responsible for putting them in place.