Václav Havel: From the Prague Spring to the Velvet Revolution to the Year of the Protestor 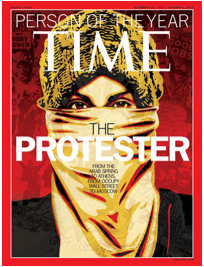 For Havel, the moment that started the Charter 77 movement, and ultimately, a decade later, the Velvet Revolution, was the 1976 trial–on charges of disturbing the peace–of the underground rock band, Plastic People of the Universe. In a feuilleton called “The Trial” Havel described how the event exposed the illegitimacy of the authorities and their ideology. Yet even as that became clear–even as it became clear that this rather ordinary event was going to take on much deeper significance–the government continued to play its part, thereby delegitimizing itself. Havel used the language of theater to describe what happened.

What is even stranger, nothing could be done about it: the play, once it started, had to be played through to the end, thus finally showing how terribly its initiators had entangled themselves in the net of their own prestige. They did not dare to halt the whole thing and admit their error, but rather went through with the embarrassing spectacle to the very end. At the same time the actors in this spectacle found themselves in a paradoxical situation: the more honestly they played their parts, the more obviously they uncovered their unforeseen meaning, thus becoming the co-creators of an entirely different performance than they had thought they were playing, or had wanted to play.

Out of that moment, Charter 77 formed as a fairly amorphous group designed to insist the government fulfill the human rights commitments it had signed onto:

Charter 77 is a loose, informal and open association of people of various shades of opinion, faiths and professions united by the will to strive individually and collectively for the respecting of civic and human rights in our own country and throughout the world.

[snip] Charter 77 is not an organization; it has no rules, permanent bodies or formal membership. It embraces everyone who agrees with its ideas and participates in its work. It does not form the basis for any oppositional political activity. Like many similar citizen initiatives in various countries, West and East, it seeks to promote the general public interest. It does not aim, then, to set out its own platform of political or social reform or change, but within its own field of impact to conduct a constructive dialogue with the political and state authorities, particularly by drawing attention to individual cases where human and civic frights are violated, to document such grievances and suggest remedies, to make proposals of a more general character calculated to reinforce such rights and machinery for protecting them, to act as an intermediary in situations of conflict which may lead to violations of rights, and so forth.

Out of that movement (and more generally since the Prague Spring), as Havel describes in Power of the Powerless, might be built a “parallel polis,” a culture growing out of people’s urge for self-organization and living in the truth. As it happened in Eastern Europe, this included underground rock, samizdat, free universities, and so forth. Havel hoped (writing in 1978, over a decade before the Velvet Revolution) this parallel polis would,

slowly but surely become a social phenomenon of growing importance, taking a real part in the life of society with increasing clarity and influencing the general situation.

As history played out, that parallel polis played perhaps an even larger role in Czechoslovakia’s history than the man who would one day serve as its President might have hoped.

When he spoke of post-totalitarian society, Havel meant communist, not capitalist, society. But as I suggested, he didn’t believe post-capitalist countries were much better.

People are manipulated in ways that are infinitely more subtle and refined than the brutal methods used in the post-totalitarian societies. But this static complex of rigid, conceptually sloppy, and politically pragmatic mass political parties run by professional apparatuses and releasing the citizen from all forms of concrete and personal responsibility; and those complex focuses of capital accumulation engaged in secret manipulations and expansion; the omnipresent dictatorship of consumption, production, advertising, commerce, consumer culture, and all that flood of information: all of it, so often analyzed and described, can only with great difficulty be imagined as the source of humanity’s rediscovery of itself.

He predicted it would take far more for those in democratic countries to wake up to the way the system ideologically co-opted people.

In democratic societies, where the violence done to human beings is not nearly so obvious and cruel, this fundamental revolution in politics has yet to happen, and some things will probably have to get worse there before the urgent need for that revolution is reflected in politics.

I can’t help but think what an appropriate time it was–almost exactly a year to the day after Mohamed Bouazizi’s self-immolation did, world-wide, what the Plastic People of the Universe trial did in 1976: show everything in a different light and set off the potential disintegration of the system. And, too, Havel died as the US government finally set in motion Bradley Manning’s trial, one that like that trial in 1976 may well have a predictable outcome that nevertheless will damage the legitimacy of the government.

Havel lived to see oligarchy ascending into power in the developed world. And he lived to see the nearly worldwide reaction against globalized oligarchy–a global moment akin to the events of 1968 and 1989 that Havel played such a key role in. This moment, it seems, was an appropriate time for Havel to pass on the torch of dissidence.