In Rush to Transcribe Military’s Concern on Why We Can’t Leave Afghanistan, Did NY Times Fact-check “Classified” Report? 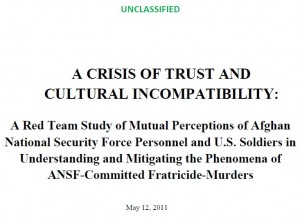 Anyway, if we dive into this report, the executive summary gives us the list of reasons cited by Afghan troops for why they become upset with US troops. Reading this list brings up the question of whether training of US troops is just as much a failure as our training of Afghan troops (quotations here are my transcriptions, the pdf was saved in a form preventing copying):

Sixty-eight focus groups were conducted on 613 ANSF personnel throughout three provinces at 19 locations. Their reported negative views, experiences and observations of U.S. Soldiers’ social behaviors were recorded. ANSF members identified numerous social, cultural and operational grievances they have with U.S. Soldiers. Factors that created animosity were reviewed through a content analysis that measured frequency and intensity of the perceived grievances. Factors that fueled the most animosity included U.S. convoys not allowing traffic to pass, reportedly indiscriminant return U.S. fire that causes civilian casualties, naively using flawed intelligence sources, U.S. Forces conducting night raids/home searches, violating female privacy during searches, U.S. road blocks, publicly searching/disarming ANSF members as an SOP when they enter bases, and past massacres of civilians by U.S. Forces (i.e., the Wedding Party Massacre, the Shinwar Massacre, etc.). Other issues that led to altercations or near-altercations (including many self-reported near-fratricide incidents) included urinating in public, their cursing at, insulting and being rude and vulgar to ANSF members, and unnecessarily shooting animals. They found many U.S. Soldiers to be extremely arrogant, bullying, unwilling to listen to their advice, and were often seen as lacking concern for civilian and ANSF safety during combat. CAT 1 interpreters’ (n=30) views were similiar to the ANSF’s.

And yes, the report is accurate in painting the situation as cultural incompatibility, as here are the complaints US forces had about ANSF troops:

So, yes, when we put two armed groups close to one another who hold such low opinions of each other, it is not surprising that one group would start killing the other. So far, we only have reports of Afghan troops killing US troops, but it would not be at all surprising for the converse to occur as well, given the lack of mutual trust.

Why would the Times put out this story today? As I suggest above, my gut feeling is that the Times was approached by military personnel who don’t want the US to withdraw from Afghanistan and want to use the failure of training as evidence for why we can’t leave now. Note especially how the reliance on training is tied to Obama here: it is the Obama administration that wants to rely on trained Afghan forces to take over security matters when we withdraw. Aside from the fact that when training is described as a success it almost always is attributed to David Petraeus, it seems that this particular argument is being trotted out now to provide fodder for the Republican presidential candidates to use in saying we can’t withdraw from Afghanistan. Whatever the reason, the Times appears to have fallen down in its responsibility to the public by failing to do even the most rudimentary check of the claims of those feeding them this story. I found the unclassified version of the report in just seconds by searching on the title. Why couldn’t the Times do that (or at least point out that there coincidentally just happens to be an unclassified version that also is 70 pages long)? And after finding the report isn’t really classified, would they have looked a bit deeper into the motives of those feeding them the story?

Update: And now there is a second correction on the New York Times article:

The article also referred incompletely to the military study’s secrecy. While it was classified, as the article reported, it was first distributed in early May 2011 as unclassified and was later changed to classified. (The Times learned after publication that a version of the study has remained accessible on the Internet.)

It appears as though Marcy’s theory in comments about retroactive classification, perhaps after the Wall Street Journal article was published, is most likely correct. My main point remains, however. Why did NY Times fact-checkers not find the full version of the report that still could be found by searching on its title? What other aspects of the story did they accept fully from those directing them to the story?