Did the MIT Police Stake Out Aaron Swartz’ Home on January 6, 2011? 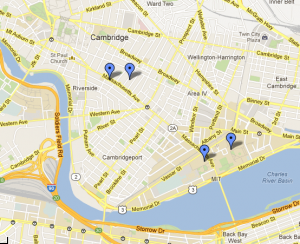 One of the details I’ve been puzzled by in the Aaron Swartz story is how MIT Police Captain Albert Pierce happened to locate Aaron on January 6, 2011. After all, Aaron was filmed in the circuit closet at 12:32 PM, but left by 12:34. He went from there to MIT’s Student Center, where he plugged his computer in again. MIT must have lost track of him, because they didn’t find his computer until 3PM, and they found it by looking for the computer ID, not by tracking Aaron’s path. Aaron wasn’t found until 2:11, when Pierce saw him riding his bike down Massachusetts Avenue.

What are the chances, I’ve been wondering, that this Captain–possibly in the company of Secret Service Agent Michael Pickett (the NYT seems to suggest they were together; the arrest report suggests Pickett got called in)–found Aaron just riding down Mass Ave?.

I think Saul has provided the answer.

The map above shows the location of the two MIT buildings (in the lower right) and where Aaron was arrested on Lee Street (Saul did a more complete map here, also showing the Secret Service office). The fourth dot shows where Aaron lived at the time: 950 Mass Ave.

In other words, Pierce just happened to be less than two blocks away from Aaron’s home when he spotted him.

That would solve one mystery, but raises another one: how did they ID Aaron?

Though that one is pretty easy to solve, too. After all, when the CPD and Secret Service first checked the laptop on January 4, they fingerprinted the computer. In addition, they had pictures from Swartz’ entry that day.

It would have been very easy to find a picture of Aaron. I’m more curious whether authorities had his fingerprint on file, though. I guess we’ll learn that when his full FBI file gets liberated.

In any case, if Pierce was, in fact, staking out Aaron’s house (what is the MIT cops’ authority to do that, anyway?), then it would suggest they knew exactly who he was before they arrested him.

Update: The affidavit used to get a warrant for Aaron’s USB made this claim.

An MIT police officer who had seen several pictures taken by the covert camera in Building 16’s network wiring closet saw Aaron Swartz on a bicycle near MIT, approximately half an hour after the “ghost laptop” had been connected in Building W20.

Yep, that’s a load of half-truth.