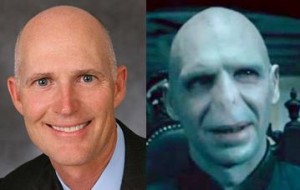 Scott’s attempts to look human are hampered by his striking resemblance to Voldemort.

Rick Scott was elected Governor of Florida in 2010 by a razor-thin margin that many attribute to his strong support from the Tea Party movement. A large portion of that support was garnered through his highly public opposition to President Obama’s Affordable Care Act. However, with the small exception of my Congressional district electing batshit crazy Tea Partier Ted Yoho in 2012, it appears that the Tea Party is on a bit of a retreat in Florida and so, with Charlie Crist now looking like a very formidable opponent for the 2014 gubernatorial race, Scott is systematically reversing his position on a number of issues away from the crazy and toward both the human and the humane.

A huge step in Scott’s attempted move back toward humanity took place early yesterday evening, as he announced his support for Florida participating in expansion of Medicaid under the ACA. He even resorted to the death of his mother to justify the move:

The governor said he gained new perspective after his mother’s death last year, calling his decision to support a key provision of the Affordable Care Act a “compassionate, common sense step forward,” and not a “white flag of surrender to government-run healthcare.”

However, the representatives of Professional Crazy were not amused by this development. From the same AP article:

“I am flabbergasted. This is a guy who, before he was a candidate for governor, started an organization to fight ‘Obamacare’ in the expansion of medical entitlements. This is a guy who said it will never happen on his watch. Well, here it is,” said Slade O’Brien, Florida director of the conservative group Americans for Prosperity.

In other words, AFP notes that Scott was just one more of their huge investments that produced very poor returns.

And McClatchy brings us the Tea Party response, thankfully translated from the original jibberish:

“This is just another example of Republicans lying to Floridians,” said Everett Wilkinson of Palm Beach Gardens, calling Scott “the Benedict Arnold to the patriot and tea party movement in Florida.”

Of course, Florida’s Grifter in Chief (who still holds the record for the largest federal fine paid by a company for Medicare fraud) wouldn’t make this move if he couldn’t further enrich his old HCA co-conspirators or other corporate fraudsters, and so he has engineered a new opportunity. From the AP article:

Scott’s announcement came hours after federal health officials said they plan to approve the state’s longstanding request to privatize its Medicaid program statewide if they agree to beef up transparency and accountability measures. He said that decision signaled that feds were willing to work with the state to give them the flexibility they need.

Okay, now I see the “transparency” in this particular move.

Yesterday’s move by Scott comes on the heels of his amazing turn-arounds on his participation in the blatantly partisan efforts to suppress Democratic votes in the 2012 election and a stunning reversal on education funding, as well. His reversal on voting was carried out on no less a platform than CNN and his education reversal made for an interesting observation from the editorial writers at the Gainesville Sun:

It’s startling to see Gov. Rick Scott transform from being the University of Florida’s tormentor to its new best friend.

And the Senate and House Minority Leaders see through Scott’s reversal on K12 funding:

Senate Minority Leader Chris Smith, D-Fort Lauderdale, said the economy is moving forward, but Scott is “back-pedaling” with his eyes on the 2014 election because his reform efforts in education, pensions and insurance have not been popular.

“When he’s now throwing divots and dollars at education, after he came in and slashed education, he’s finally admitting that he was wrong to try to starve education.

“Because of the things he’s done in the past, he’s not really putting them ahead.”

House Minority Leader Perry Thurston, D-Fort Lauderdale, called Scott’s proposal “woefully lacking” because of the requirement for state employees to contribute 3 percent of their pay into the Florida Retirement System and the $1.3 billion in cuts to education in 2011. 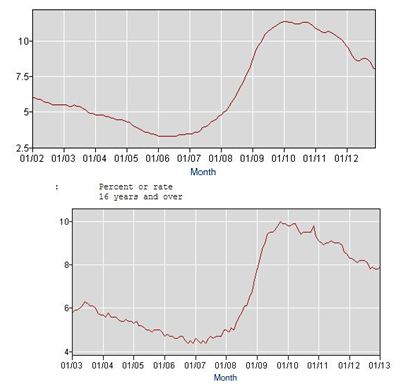 It will be interesting to see how Scott tries to spin these lackluster results on job creation. I’d put a big wager on Scott saying it’s all Obama’s fault.