A Path To Civil Rights History For the Supreme Court, Obama and Verrilli 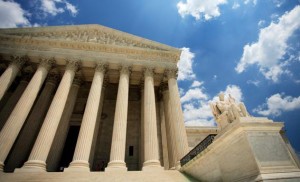 Just about a month ago, in urging the Obama Administration to file a brief in favor of marriage equality in the Hollingsworth v. Perry Prop 8 case before the Supreme Court, I described the stakes:

And here we are on the cusp on the next defining moment in the quest for equality for all in the US. It is not for origin, not for skin color, not for gender, but for something every bit as root fundamental, sexual identity and preference. Marriage equality, yes, but more than that, equality for all as human beings before the law and governmental function.

For all the talk of the DOMA cases, the real linchpin for the last measure of equality remains the broad mandate achievable only through Hollingsworth v. Perry, the Proposition 8 case.

It was true then, it is true now. To the everlasting credit of of President Obama, Solicitor General Verrilli and the Administration, they did indeed file a brief in support. It was a surprisingly strong brief with a clarion call for full equality based upon heightened scrutiny; yet is was conflicted with a final ask only for a restricted ruling limited in application to either just California or, at most, a handful of somewhat similarly situated states. In short, the ask in the Administration’s brief was not for equality for all, in all the states; just in some.

On the eve of one one of the seminal moments of Supreme Court history – it is easily arguable this is far more of a defining moment than the ACA Healthcare scuffle was – it is again incumbent on the Administration to give the justices the headroom to make a broad decision granting equality for all.

Even in the short time since the Obama Administration filed their brief, between February 28 and now, the mounting tide of public opinion and desire for full equality has grown substantially in multiple ways. Colorado, a state where the thought was once beyond contentious, passed full civil union equality and Governor Hickenlooper signed it into law. And a new comprehensive Washington Post/ABC News public poll has found that a full 58% of Americans now support the legality of gay nuptials, and a whopping 81% of adults between the ages of 18 and 29 so support.

The writing is on the wall, and the trend overwhelming. And it simply does not make sense for the Obama Administration to buck this tidal wave and argue only for equality in a handful of states, with equality for some, but far from for all. Barack Obama and Donald Verrilli laid every bit the foundation needed to argue for broad based full equality – in all states – in their brief.

It is time for Mr. Obama and Mr. Verrilli to step up and forcefully tell the Supreme Court that full equality is the right way to rule. The Court granted Solicitor General Verrilli time to express the Administration’s position in the oral argument Tuesday; he should use it in the name and cause of full broad based equality. It is a time for leadership; this is a moment for Mr. Obama and his attorney to display it.

By the same token, it is also time for the Supreme Court to do the same. So often it has been argued the “Court should not get out in front of popular opinion”. Bollocks, the Court should refuse to put themselves behind public opinion, and an ever strengthening one at that, by shamefully ducking the perfect opportunity to stand for that which the Constitution purports to stand, equal protection for all.

There are a myriad of legal arguments and discussions, and just about every commenter and expert in the field has been offering them up over the last week. I will leave that to another day, after the court has heard the oral arguments, we have our first inclination of what the justices are focused on, and the case is under advisement for decision.

For now, here are a couple of warms ups for Tuesday’s oral argument in Hollingsworth v. Perry/Prop 8 and Wednesday’s oral argument in United States v. Windsor/DOMA. First a nice little video “Viewer’s Guide to Gay Marriage Oral Arguments” with Supreme Court barrister extraordinaire, and SCOTUSBlog founder, Tom Goldstein. Here is a handy flow chart of all the different possibilities, and the why for each, of how the court may rule on both cases. It is really pretty neat and useful tool.

The briefing is long done now and the Justices understand the issues. But if the ACA/Healthcare cases taught us anything, it is that Justice Roberts is concerned about the legacy and esteem of the court. And Justice Kennedy has already shown how committed he is to fairness in social justice issues and willing to even go out on limbs ahead of controversial public opinion with his written opinions.

At this point, the most effective leverage is not repeated discussion of the minutiae of law, but rather the demonstration of the righteousness of full equality. History will prove fools of those who sanction continued bigotry against marital equality, and anything less than a broad based heightened scrutiny finding, for equality for all people, in all states, is a continuation of such unacceptable bigotry.

UPDATE: Professor Adam Winkler of UCLA has a piece out today that embodies my point in the post perfectly. Discussing the disastrous and ugly 1986 decision of the Supreme Court in Bowers v. Hardwick to uphold sodomy laws when times and opinion had already changed, and the profound regret felt by Anthony Kennedy’s predecessor, Lewis Powell, Professor Winkler writes:

Kennedy is clearly a justice who considers how his legacy will be shaped by his votes. In 1992, when the Supreme Court was asked to overturn Roe in a case called Planned Parenthood v. Casey, Justice Kennedy originally sided with the conservatives to reverse the controversial privacy decision. Like Justice Powell in Bowers, Justice Kennedy then changed his vote. He went to see Justice Harry Blackmun, the author of Roe, and explained that he was concerned about how history would judge Kennedy’s decision to end constitutional protections for women’s right to choose.

Like many people, Justice Kennedy may believe that the public tide against marriage discrimination is growing and that gay marriage is inevitable. History is not likely to be kind to those justices who vote to continue relegating LGBT people to second-class citizenship. As the swing justice ponders how to rule in the gay-marriage cases, Justice Powell’s well-known regret over Bowers, and the widespread recognition that Bowers was wrongly decided, will almost certainly weigh on his mind.

Adam’s article is worth a full read. And I agree with it completely.

tweets from our circle
bmaz@bmazRT @tathompsonKS: @bmaz The area of the crash (near 05CA) is not within Class B airspace, and it looks like they flew underneath Class B al…26 minutes ago26 January 2020
bmaz@bmazNice story just now on CNN from Kenny Smith. After Hurricane Katrina, Smith wanted to do a charity BB game to rais… twitter.com/i/web/status/1…36 minutes ago26 January 2020
bmaz@bmazRT @tathompsonKS: @bmaz Very sad news. They were squawking 1200 so they were likely not talking to ATC. If they were, they would have bee…47 minutes ago26 January 2020
Ed Walker 🍞🌹@MasaccioEWRT @HirudoStreet: @leslieleeiii @crazytimes73 it's like they believe all the corporate media puppets that unanimously rave about the stock…4 hours ago26 January 2020
emptywheel@emptywheelRT @matthewamiller: “If any man among you seem to be religious, and bridleth not his tongue, but deceiveth his own heart, this man's religi…5 hours ago26 January 2020
Jim White@JimWhiteGNVWhat bringing up the “head on a pike” comment is not: an outrage. What it is: further proof that the count of obs… twitter.com/i/web/status/1…1 day ago25 January 2020
Jim White@JimWhiteGNVPretty sure I need to do an exorcism on my mailbox. This came yesterday for the previous owner of our house. pic.twitter.com/bt5Voi0WkW2 days ago24 January 2020
Jim White@JimWhiteGNVRT @danielsgoldman: It was an honor and a pleasure to experience this from the Senate floor tonight. Proud to work for @RepAdamSchiff. #Rig…2 days ago24 January 2020
RayneToday@raynetodayCan't help thinking this is all in and out of golf courses. twitter.com/ScottMStedman/…4 days ago22 January 2020
RayneToday@raynetodayI'm sure what I'm thinking and asking aren't unique. But while Trump is bragging about his crime of obstruction on… twitter.com/i/web/status/1…4 days ago22 January 2020
Identity Problem: Blind Journalism, Uninformed Technology, and Cory Booker Once Again, US Pretends to Hand Over Control of Parwan Prison, Holds Back Some...
Scroll to top