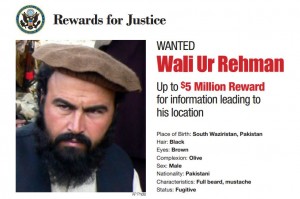 Will the drone pilot get the $5 million reward?

The latest CIA drone strike in North Waziristan is described by Reuters as having killed the number two figure in the Pakistan Taliban group known as the TTP. This strike was a first on many fronts. It was the first since the election of a new government in Pakistan, with new Prime Minister Nawaz Sharif slated to take office next week, the first since President Barack Obama’s drone rules speech and the first strike in Pakistan since the Peshawar High Court ruled that US drone strikes in Pakistan are war crimes.

Despite public pronouncements by both the caretaker interim government and the incoming Prime Minister that they oppose CIA drone strikes, this strike is likely to produce less official backlash since the TTP has a long history of attacking both military and civilian targets inside Pakistan. But the CIA had their own reason to target this particular figure. From the State Department’s Rewards for Justice program, we have this description of Wali Ur Rehman (pdf):

Wali Ur Rehman, is second in command and chief military strategist of Tehrik-e-Taliban Pakistan (TTP). He commands TTP members in South Waziristan. He has participated in cross-border attacks in Afghanistan against U.S. and NATO personnel, and is wanted in connection with his involvement in the murder of seven American citizens on December 30, 2009, at Forward Operating Base Chapman in Khost, Afghanistan.

Shortly after the devastating attack in Khost, the CIA vowed revenge:

The CIA yesterday vowed to avenge the deaths of seven of its agents who were killed in a suicide bombing on Wednesday in Afghanistan, as it emerged that the bomber may have been invited on to the base as a potential informant according to two former US officials.

“This attack will be avenged through successful, aggressive counterterrorism operations,” a US intelligence official said on condition of anonymity.

It would appear that the CIA has now exacted that revenge, subject, of course, to the usual caveats that key figures targeted in drone strikes often have a way of popping up later unharmed. Gosh, I wonder if that was Mr. Moral Rectitude himself who gave that anonymous quote about revenge to the Guardian back when he was an “intelligence official” inside the White House instead of his current job running the CIA.

Update: I have been reminded on Twitter and elsewhere that in his speech last week, Obama said “America does not take strikes to punish individuals“. That seems to run in direct opposition to the vow from the CIA to avenge Khost and Ur Rheman’s accused role in that attack resulting in today’s attack.