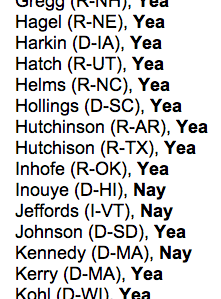 If you appreciate the work we do here, please support our Two Millionth Visitor Fundraiser.

For the life of me, I don’t know why they’re doing this. But in both the House Foreign Affairs Committee hearing Wednesday and on Chris Hayes’ show yesterday, John Kerry made a remarkable claim.

KERRY:  — I disagree.  And, first of all, let — let — let me make this clear.  The president — and this is very important, because I think a lot of Americans, all of your listeners, a lot of people in the country are sitting there and saying oh, my gosh, this is going to be Iraq, this is going to be Afghanistan.  Here we go again.

And the answer is no, profoundly no.  You know, Senator Chuck Hagel, when he was senator, Senator Chuck Hagel, now secretary of Defense, and when I was a senator, we opposed the president’s decision to go into Iraq, but we know full well how that evidence was used to persuade all of us that authority ought to be given.

I can guarantee you, I’m not imprisoned by my memories of or experience in Vietnam, I’m informed by it.  And I’m not imprisoned by my memory of how that evidence was used, I’m informed by it.  And so is Chuck Hagel.  And we are informed sufficiently that we are absolutely committed to not putting any evidence in front of the American people that isn’t properly vetted, properly chased to ground and verified.  And we are both convinced that what we are putting before the American people is in the security interests of our country and it will not lead to some further engagement. [my emphasis]

John Kerry’s flip-flopping support for President Bush’s disastrous Iraq War was one of the most heavily litigated issues in the 2003 to 2004 Presidential campaign. Everyone knows he supported that war and only later came out against it.

And of course, a secret intelligence source called a roll call shows that both men did support Bush’s decision to go to war.

I suppose what John Kerry means — but is not saying explicitly — is that after the war started going south, he pointed to Bush’s politicized intelligence as an excuse for his vote (while still usually voting to fund the ongoing war).

But that points to the way the Syrian attack is most likely to be like the Iraq War: after all, had the war not turned out to be such a disaster, Bush’s lies to start it wouldn’t have mattered as much. Yet the war did turn out to be a disaster. The entirely foreseeable unintended consequences of the Iraq attack — not the lies about WMD — ultimately made support for Iraq toxic.

Remember, though: Bush lied not just about yellowcake and aluminum tubes, he also suppressed information about the possibility of an insurgency. And whereas the claims Kerry is making about the August 21 CW strike may be completely true (though his casualty claims appear not to be), his claims about what might happen if we overthrow Assad probably aren’t. According to Homeland Security Chair Mike McCaul, Kerry’s claims that only 15 to 25% of the rebels are extremists do not match what the intelligence community has briefed him (they’ve said over half of the fighters are extremists).

And so when Kerry says Syria will not be like Iraq — and misleadingly claims he and Hagel didn’t support the war they in fact voted for — he’s actually emphasizing the way it could very well be just like Iraq: in which the Administration presented a false picture about how easy the aftermath of the attack would be, which in turn led a lot of people — perhaps Kerry more than any other person — to regret their votes.

What matters about the Iraq War here is that it was sold as a cakewalk in spite of the fact the government knew an insurgency was likely, not that that cakewalk was sold using yellowcake and aluminum tubes. And in that sense, we already know the proposed Syria attack is like the Iraq War, because we know the government is fibbing about what might come next.

And that’s almost as readily apparent as is the misleading nature of Kerry’s claim that he (and Hagel) didn’t support Bush’s cakewalk.

Update: Meanwhile, the source Kerry cites for his estimates on numbers of extremists is a consultant for the rebels.

On Wednesday, Secretary of State John Kerry encouraged members of the House of Representatives to read a Wall Street Journal op-ed by 26-year-old Elizabeth O’Bagy — an analyst with the Institute for the Study of War — who asserted that concerns about extremists dominating among the Syrian rebels are unfounded.

“Contrary to many media accounts, the war in Syria is not being waged entirely, or even predominantly, by dangerous Islamists and al-Qaida die-hards,” O’Bagy wrote for the Journal on Aug. 30. “Moderate opposition groups make up the majority of actual fighting forces,” she wrote.

But in addition to her work for the Institute for the Study of War, O’Bagy is also the political director for the Syrian Emergency Task Force (SETF), a group that advocates within the United States for Syria’s rebels — a fact that the Journal did not disclose in O’Bagy’s piece.
.