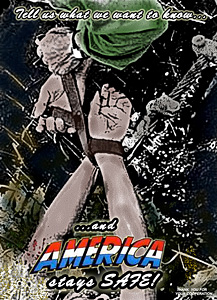 In an earlier post I discussed the startling direct admission that the United States tortures terror detainees made public in last Wednesday’s blockbuster Bob Woodward piece in the Washington Post. As the Bush Administration’s hand picked convening authority for the military tribunals, otherwise known as the "Gitmo Show Trials", Susan Crawford’s admission carries the binding mark of credibility.

The proposal Obama is considering would require all CIA interrogators to follow conduct outlined in the U.S. Army Field Manual, the officials said.
…
However, Obama’s changes may not be absolute. His advisers are considering adding a classified loophole to the rules that could allow the CIA to use some interrogation methods not specifically authorized by the Pentagon, the officials said.

This is where Susan Crawford’s stark admission comes into play. As Crawford admits, most all of the techniques used on al-Qahtani were actually permissible, but the layering of techniques compounded them into unmistakable torture.

Crawford, 61, said the combination of the interrogation techniques, their duration and the impact on Qahtani’s health led to her conclusion. "The techniques they used were all authorized, but the manner in which they applied them was overly aggressive and too persistent. . . . You think of torture, you think of some horrendous physical act done to an individual. This was not any one particular act; this was just a combination of things that had a medical impact on him, that hurt his health. It was abusive and uncalled for. And coercive. Clearly coercive. It was that medical impact that pushed me over the edge" to call it torture, she said.

Crawford has exposed to bright sunlight the lie that is Barack Obama’s, and other politicians’, simple minded reliance on the Army Field Manual as cover for their torture reform credentials. Interrogators can stay completely within the Army manual and still be engaging in clear, unequivocal torture under national and international norms, laws and conventions.

The case is laid out convincingly by Dr. Jeffrey S. Kaye, a clinical psychologist specializing in the analysis and treatment of torture victims. Dr. Kaye has been tirelessly fighting the US torture regime through both his clinical work and his blog Invictus under the pseudonym Valtin. In a comprehensive article originally published at AlterNet, and cross-posted at Invictus, he filets open the Army Field Manual lie.

In early September 2006, the U.S. Department of Defense, reeling from at least a dozen investigations into detainee abuse by interrogators, released Directive 2310.01E. This directive was advertised as an overhaul and improvement on earlier detainee operations and included a newly rewritten Army Field Manual for Human Intelligence Collector Operations (FM-2-22-3). This guidebook for interrogators was meant to set a humane standard for U.S. interrogators worldwide, a standard that was respectful of the Geneva Conventions and other U.S. and international laws concerning treatment of prisoners.
…
There was only one problem: the AFM did not eliminate torture. Despite what it said, it did not adhere to the Geneva Conventions. Even worse, it took the standard operating procedure of Camp Delta at Guantanamo Bay and threatened to expand it all over the world.
…
The viral instructions in the AFM transform into an abusive and illegal torture program. Most of these "instructions" can be found hidden in the proverbial fine print of the document, in its very last appendix, labeled with no apparent irony as regards the mythology of James Bond, Appendix M.

Appendix M, titled "Restricted Interrogation Technique — Separation," misrepresents itself from the very beginning. (One wonders if it was rewritten from an earlier draft, at a time when the Pentagon wanted to keep these procedures classified.) It is not actually a technique (singular), but a set of techniques, though one has to read deeply into its 10 pages of text and be somewhat sophisticated in the history of psychological torture procedures, to assemble a full view of the viral program.

This program is nothing less than the one established in researcher Albert Biderman’s Chart of Coercion, which, as revealed by the recent Senate Armed Services Committee investigation into detainee abuse, was the blueprint used by SERE instructors at Guantanamo in late 2002 to teach abusive interrogation techniques. (SERE stands for Survival, Evasion, Resistance, Escape and is the military program to "inoculate" certain military personnel against torture or abusive treatment by an enemy that doesn’t recognize Geneva protocol.)
…
What kind of procedures, which the manual avers cannot be used on regular prisoners of war (who are covered by the Geneva Convention Relative to the Treatment of Prisoners of War), make up this special interrogation "technique," separation? In fact, it includes the following: solitary confinement, perceptual or sensory deprivation, sleep deprivation, the induction of fear and hopelessness, and the likely use of sensory overload, temperature or environmental manipulation, and any number of other techniques permitted elsewhere in the AFM, such as "Emotional Pride Down." As at Guantanamo and at prisons in Iraq and Afghanistan, a "multidisciplinary" team implements the program, including a behavioral science consultant (likely a psychologist).

This is the lie. The Army Field Manual provisions, especially with those pesky footnotes like "Appendix M", leave a wide open path for torture. And this is exactly what Susan Crawford directly admitted to Bob Woodward. This is a significant problem, the very torture, and modalities thereof, that are so abhorrent are about to be ratified and enshrined into the ethos of the new Obama Administration. What is worse is that the media and the country as a whole are biting off on the proposition that the torture regime is being slain in the process, and that is simply not the case.

The Guantanamo virus is spreading. Its agent is Appendix M of the Army Field Manual. It will be very difficult to eradicate. It will require the effort of every person who believes in human rights and is opposed to torture to spread the word.
…
The AFM as constituted must not be made the "one national standard" until the virus is eradicated. Appendix M must be rescinded in its totality, and portions of the document, such as the section on Fear Up, rewritten. Otherwise, Bush’s and Rumsfeld’s attempt to sneak coercive methods of interrogation into the main document of human intelligence gathering used by the military will succeed.

Not all is bleak here. There is no question but that Obama and his team will have better policies and intentions than the Bush wrecking crew. That is a given. The mere desire to do better is a welcome improvement on the bellicose belligerence of George Bush and Dick Cheney. And the man President-Elect Obama has chosen to serve as General Counsel at the Department of Defense, Jeh Johnson, upon questioning at his confirmation hearing, exhibited a remarkable willingness to reconsider the entire torture regime policy instituted by the Bush Administration.

So, there is hope for a far better interrogation policy set from the incoming Obama Administration. But it is not enough to simply have the audacity of hope on the subject of torture, concrete steps need to be taken to prove to the American people, and more importantly the world, that the United States is turning its back on the policies and practices of the Bush torture regime. If the Army Field Manual is going to be the reference standard for US interrogation policy, then it needs to be retooled and excised of provisions like "Appendix M" and others that are glaring gaps allowing for techniques, and the compounding of techniques, that constitute torture.

The hearts of the incoming Obama Administration’s interrogation policy appear to be in a better, more righteous, place than the torture regime of the predecessor Bush gang; but let their words and deeds reflect it. If the US is going to rely on the Army Field Manual, fine, but they must promise to edit and remove black holes like "Appendix M", and others, allowing for continued torture programs. American law and policy must be written and enforced to be in compliance with international norms and conventions. Mr. Obama, tear down the American policy of torture, and do it clearly, unequivocally and now.

(graphic by the incomparable Darkblack)