The Sartorial Splendor of NYTimes Professionals (MoDo) at Work 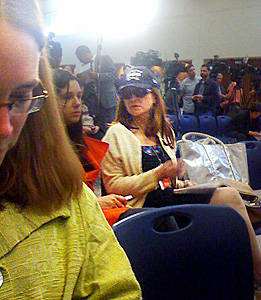 As you may recall, Jim Risen of the New York Times recently caught a little flack for producing a rather un-Risen like article in the Times on the “suddenly discovered” Afghanistan mineral mother lode. When a few astute souls, led by several in the main media, mused that it seemed an odd story coming from Risen’s pen, Risen went a tad apoplectic.

I respect Risen; seems to be a decent chap so, like Marcy, I kind of internally cut him some slack and blew it off even though the story was curious and the mineral deposits were long known. Cest la vie. Until Risen decided to lash out with an unnecessary, undeserved and mean spirited frontal assault on bloggers:

In an interview with Yahoo! News, Risen dismissed suspicions that the story was part of an orchestrated campaign to rescue the troubled American effort there and derided critical bloggers as pajama-clad layabouts with no reporting chops.

Aw Jim, why did ya go and do that? Because now I have to point out what kind of sophisticated high fashion threads the high and mighty stars of the New York Times, Risen’s home, wear when covering the biggest and most important stories of our age. In the august and serious halls of United States District Court.

You see, Marcy and I had the privilege of covering closing arguments in United States Federal Court in San Francisco on the groundbreaking Perry v. Schwarzenegger case. As luck would have it, so too one of the tenured star of stars from the New York Times was present with us covering the critical closing arguments. None other than the high doyenne herself, Maureen Dowd! Exciting!

But while I, a lowly blogger, was clad in a Brooks Brothers suit, Canali tie and well polished Cole Haans, the star representative from the venerable Gray Lady New York Times, home of uptight sartorial snobs like Jim Risen, came dressed quite in a different and interesting fashion. Take a look and judge for yourself whether the haughty boys and girls at the New York Times ought to be blowing dung out their posteriors at other reporters over fashion sense and choice. Go ahead clotheshorses of the Gray Lady, make my day.

The traditional prize awarded for outstanding commentary, the cherished Emptywheel hubcap, will be bestowed to the most creative caption for this precious photo. Let the contest begin!