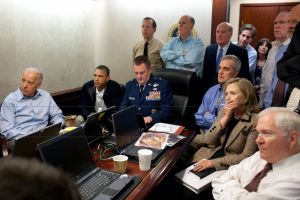 The first time I read Nicholas Schmidle’s breathtaking account of Osama bin Laden’s killing, I gave up when I got to this passage:

John Brennan, Obama’s counterterrorism adviser, told me that the President’s advisers began an “interrogation of the data, to see if, by that interrogation, you’re going to disprove the theory that bin Laden was there.” The C.I.A. intensified its intelligence-collection efforts, and, according to a recent report in the Guardian, a physician working for the agency conducted an immunization drive in Abbottabad, in the hope of acquiring DNA samples from bin Laden’s children. (No one in the compound ultimately received any immunizations.)

The article, which alternated between incredibly detailed accounts of the SEALs’ actions with more generalized depictions of Obama’s leadership, seemed designed to puff up the operation anyway. And while I’m not at all qualified to fact check the military details of it, the fact that Schmidle cited the Guardian–and not any of his own sources–for the most criticized aspect of the raid tells you a lot about the agenda of his sources. Furthermore, the fact that the Guardian provided slightly different details about the outcome of the immunization operation than Schmidle …

A nurse known as Bakhto, whose full name is Mukhtar Bibi, managed to gain entry to the Bin Laden compound to administer the vaccines. According to several sources, the doctor, who waited outside, told her to take in a handbag that was fitted with an electronic device. It is not clear what the device was, or whether she left it behind. It is also not known whether the CIA managed to obtain any Bin Laden DNA, although one source suggested the operation did not succeed.

… may indicate yet another level of manipulation on this detail of the raid.

Since that first reading, a number of people who are qualified to fact check the military details have suggested it was a nice propaganda piece. But they all remained mum about how they could tell.

Which is why I found this article, which describes Schmidle’s efforts to avoid questions about his sourcing, instructive. Among other things, it explains that Schmidle has made linguistic mistakes when covering Pakistan in the past, and suggests he might have limited linguistic understanding here, too.

He even describes how the translator Ahmed hollered in Pashto at the locals that a security operation was ongoing to allay their suspicions about the nature of the cacophony in the cantonment town. (This detail caught my eye as the majority of persons in Abbottabad, where the raid took place, speak Hindko rather than Pashto.)

While this piece doesn’t tell us what details are false, it emphasizes that Schmidle did not source the article where it appears to be sourced, to the SEALs who took part in the operation.

Now, I’m not surprised folks within the Obama Administration are leaking such heroic versions of the OBL raid. But in the context of the Administration’s war on leaks, it deserves more discussion. For example, I find it telling that a “counterterrorism official” repeatedly refutes the events presented from the perspective of the SEALs that–we know–Schmidle isn’t reporting directly.

After blasting through the gate with C-4 charges, three SEALs marched up the stairs. Midway up, they saw bin Laden’s twenty-three-year-old son, Khalid, craning his neck around the corner. He then appeared at the top of the staircase with an AK-47. Khalid, who wore a white T-shirt with an overstretched neckline and had short hair and a clipped beard, fired down at the Americans. (The counterterrorism official claims that Khalid was unarmed, though still a threat worth taking seriously. “You have an adult male, late at night, in the dark, coming down the stairs at you in an Al Qaeda house—your assumption is that you’re encountering a hostile.”)

Three SEALs shuttled past Khalid’s body and blew open another metal cage, which obstructed the staircase leading to the third floor. Bounding up the unlit stairs, they scanned the railed landing. On the top stair, the lead SEAL swivelled right; with his night-vision goggles, he discerned that a tall, rangy man with a fist-length beard was peeking out from behind a bedroom door, ten feet away. The SEAL instantly sensed that it was Crankshaft. (The counterterrorism official asserts that the SEAL first saw bin Laden on the landing, and fired but missed.)

These are, after all, some of the details that raise legal questions about the raid (and which John Brennan botched in the days immediately following the raid). And by presenting this story falsely as if Schmidle spoke directly to the SEALs, it allows whatever Administration official who gave it to him the ability to both admit that SEALs fired at unarmed men while providing a Hollywood version that glosses over that part. From a narrative perspective, it’s worthy of a popular novelist.

Finally, though, the whole thing raises questions about who leaked this, presumably with Obama’s explicit or implicit permission.

Here’s a list of the named sources Schmidle relies on, in rough order of appearance:

Shuja Nawaz, an expert on the Pakistani Army

John Radsan, a former assistant general counsel at the C.I.A.

a senior adviser to the President

The senior adviser to the President

The senior adviser to the President

In other words, this story relies almost entirely on four sources: the special-operations officer, the senior counterterrorism official, the senior Defense Department official, and the senior adviser to the President. And among the named sources in the article are Obama’s counterterrorism adviser John Brennan, General James Cartwright, and Deputy National Security Adviser Ben Rhodes. (Former helicopter pilot and assistant commander of JSOC, Brigadier General Marshall Webb, figures prominently in the narrative, though is not quoted by name.)

And Brennan and Rhodes were reported by Schmidle to be present at some of the key low attendance events described here, such as the meeting at which Obama announced his decision to go with a SEALs operation, and the meeting at which the SEALs briefed Obama after the mission. Which is all the more telling, given that Schmidle attributed his story’s sourcing to the SEALs recollections.

…some of their recollections—on which this account is based—may be imprecise and, thus, subject to dispute.

In other words, it seems likely that Brennan and Rhodes serve as both anonymous and named sources for this story.

John Brennan had a direct role in Jeffrey Sterling’s battles with the CIA. Sterling is now being tried for allegedly leaking information equivalent to the information included in this story. Mind you, if Brennan leaked these details, he no doubt did so under the Insta-Declassification schtick that Scooter Libby used when he leaked Valerie Plame’s identity and the contents of the Iraq NIE. If the President okays leaks, they’re legal in this day and age; otherwise, they deserve the harshest punishment.

Still, this story is so thinly-veiled an Administration puff piece, it ought to attract as much attention for the sheer hypocrisy about secrecy it demonstrates as it will for the heroism such hypocrisy attempts to portray.

Update: Here’s the reason I focused on Webb (shown typing on his computer above) as the “special-forces official.”

Brigadier General Marshall Webb, an assistant commander of JSOC, took a seat at the end of a lacquered table in a small adjoining office and turned on his laptop. He opened multiple chat windows that kept him, and the White House, connected with the other command teams. The office where Webb sat had the only video feed in the White House showing real-time footage of the target, which was being shot by an unarmed RQ 170 drone flying more than fifteen thousand feet above Abbottabad. The JSOC planners, determined to keep the operation as secret as possible, had decided against using additional fighters or bombers. “It just wasn’t worth it,” the special-operations officer told me. The SEALs were on their own.

Obama returned to the White House at two o’clock, after playing nine holes of golf at Andrews Air Force Base. The Black Hawks departed from Jalalabad thirty minutes later. Just before four o’clock, Panetta announced to the group in the Situation Room that the helicopters were approaching Abbottabad. Obama stood up. “I need to watch this,” he said, stepping across the hall into the small office and taking a seat alongside Webb. Vice-President Joseph Biden, Secretary Gates, and Secretary of State Hillary Clinton followed him, as did anyone else who could fit into the office. On the office’s modestly sized LCD screen, helo one—grainy and black-and-white—appeared above the compound, then promptly ran into trouble. [my emphasis]

More tellingly, why include the detail that Obama took a seat alongside Webb? It’s a detail that Schmidle could get from the photo–so it’s not a question of how Schmidle learned the detail. Rather, it’s a question of who would care (and who would orient the President’s actions from Webb’s perspective, rather than orienting Obama’s position in the room generally). In a way, it feels like one of those renaissance paintings that includes an image of the patron in the corner of the frame, just to make sure the viewer knows who sponsored the whole thing.