Under Austerity, We Can’t Have Nice Things Like State Fairs Anymore 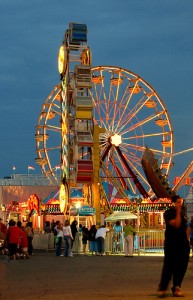 Just about every political horserace journalist is at the Iowa State Fair today, covering the Ames straw poll, and eating a seemingly endless supply of fried butter, porkchop on a stick, and meat sundaes. GOP (and a few Democratic) politicians are there too, allowing themselves to be photographed stuffing their mouths with phallic objects in an apparent attempt to appear authentic or folksy. It’s DC’s opportunity, it seems, to experience what (they imagine) life is like in quaint flyover country.

Only, life’s not like that anymore–at least not in two flyover (swing) states. In this day and age, you see, some states can’t afford nice things like state fairs anymore.

Last year, MI shut down its 160-year old fair (it was the second oldest fair in the country). And this year, NV shut down its fair for the first time in 136 years.

Now, I won’t kid you and pretend I was a long-time MI fair-goer. I went for the first time in 2009 (the last one), 14 years after I moved to the state (though my decision to go had as much to do with having a 2 year old friend I knew would love to see the “Cow-Pigs” as it being the last fair). And I think the MI State Fair’s location, in the northwest corner of Detroit, suffered from being far from the agricultural heart of the state (though of course its location made it easily accessible to the bulk of the population). If I had my way they’d reopen the fair in Lansing, still accessible to SE MI’s population base, but much closer to more of the farming in this state.

Nor do I think losing the state fair was the most tragic budget cut of the last several years. I’d support funding education and human services before we reopen the fair. But, particularly given the important role of agriculture in this state, I would like to see them reopen the fair.

State fairs are, to some extent, all about fantasy: games and dreams and shiny lights (and, in IA’s case, fantasies about flyover country). But there’s a reality behind them. And the increasing reality out here in flyover country is that we’re shutting down such fantasies because years of  tax cuts and the generalized decline of the US economy mean we can’t support them anymore.