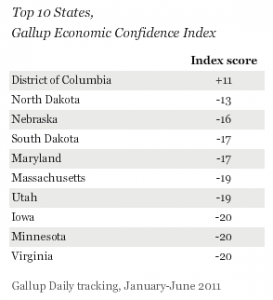 Digby points to Gallup polling numbers showing that Washington DC is the only place in the country that has improving confidence.

See, David Plouffe was right. People are feeling better about their economic prospects. At least, the people within his little bubble are.

But he might want to think about why people in his bubble are feeling good about their economic prospects.

First, because they–and neighboring states VA and MD, also among the most confident states–have been the recipients of 10 years of stimulus, supporting government-created jobs, the kind of jobs he likes to pretend don’t exist. Stimulus makes jobs which makes people feel good (and it’s worth noting that MI, which has benefited form a disproportionate share of stimulus sent to the midwest, is not among the 10 most grumpy states).

Plus, all these people living well off their Military-Industrial stimulus have reason to celebrate, as we’ve recently added another forever war for them to profit off of.

And then there’s another key industry that DC residents will be profiting off of: the upcoming billion dollar Presidential campaign, now kicking off in grand style. Heck, analyzing who eats fried butter more authentically will even provide job security for DC journos for the next 15 months.

I don’t know why the rest of the country just can’t be grateful that at least DC is doing well.

Update: As if on cue, The WaPo describes the confidence fairies that have benefited from federal stimulus, then raises concerns that this gravy train of unlimited stimulus might soon end. (h/t Teddy)

Millions of dollars worth of federal contracts transformed Anita Talwar from a government accounting clerk into a wealthy woman — one who can afford a $2.8 million home with its own elevator, wine cellar and Swarovski crystal chandeliers in the Washington suburbs.

Talwar, a 59-year-old immigrant from India, had no idea that she and her husband would amass a small fortune when she launched a company providing tech support to the federal government in 1987. But she shrewdly took advantage of programs for minority-owned small businesses and rode a boom in federal contracting.

Anita Talwar’s success — and that of hundreds of other contractors like her — is a key factor driving the explosion of the region’s wealth over the last two decades. It has also exacerbated the gap between high- and low-wage workers, which is wider in the D.C. area than almost anywhere else in the U.S.

The new Washington is a global business hub with thriving technology, biotech and communications industries. Only 12 percent of workers are federal employees. But the federal government remains an engine of job creation, outsourcing its tech support and other services to contracting firms ringing the Capital Beltway, a phenomenon that exploded in the years after 9/11.

More than $80 billion in federal contracting dollars will flow to the region this year, up from $4.2 billion in 1980, according to Stephen Fuller, director of the Center for Regional Analysis at George Mason University. Adjusted for inflation, that’s a seven-fold increase. A third of the region’s gross regional product now comes from federal spending.

But that tide is likely to slow because of a $1 trillion debt-reduction package approved earlier this month by Congress and President Obama. In the coming months, a bipartisan“supercommittee” will be searching for another $1.5 trillion in savings. Defense contractors are already bracing themselves for deep cuts in military spending.