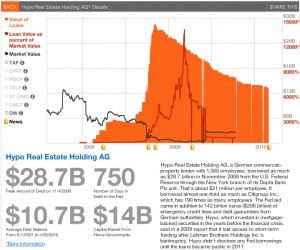 Bloomberg has a good summary and even better visual database of the various forms of Fed lending that have been revealed over the years since the bailout.

I encourage you to go play around in the database. For example, check out this summary of how the Fed lent Hypo Real Estate Holding AG, a German real estate company, $28.7B to keep the German banking system afloat after HRE’s subsidiary Depfa crashed in Ireland. Germany had already given HRE $206B; the Fed’s lending amounted to $21M for each of HRE’s 1,366 employees. And at its height, just the Fed’s lending represented 15,000% of HRE’s market value. And yet all of this remained a secret for three years after the Fed first started lending to HRE.

With the scope of all that in mind–with a way to visualize the incredibly leveraged house of cards this secret lending held up–now read what I consider to be the most important line in Bloomberg’s summary.

By 2008, the housing market’s collapse forced those companies to take more than six times as much, $669 billion, in emergency loans from the U.S. Federal Reserve. The loans dwarfed the $160 billion in public bailouts the top 10 got from the U.S. Treasury, yet until now the full amounts have remained secret

Fed Chairman Ben S. Bernanke’s unprecedented effort to keep the economy from plunging into depression included lending banks and other companies as much as $1.2 trillion of public money, about the same amount U.S. homeowners currently owe on 6.5 million delinquent and foreclosed mortgages. The largest borrower, Morgan Stanley (MS), got as much as $107.3 billion, while Citigroup took $99.5 billion and Bank of America $91.4 billion, according to a Bloomberg News compilation of data obtained through Freedom of Information Act requests, months of litigation and an act of Congress.

“These are all whopping numbers,” said Robert Litan, a former Justice Department official who in the 1990s served on a commission probing the causes of the savings and loan crisis. “You’re talking about the aristocracy of American finance going down the tubes without the federal money.” [my emphasis]

That is, the money the Fed lent out to these highly leveraged risk takers could have paid off (much less merely guaranteed) the 6.5 million delinquent and foreclosed mortgages that are currently dragging down the American economy.

But instead of offering money to homeowners who would have used it to stay in their homes and sustain their neighborhoods, the Fed instead loaned it to the banks that were leveraged to the hilt.

So here we are worried about the moral hazard of modifying principal on loans that were vastly overvalued. Here we are shredding the rule of law to try to let Bank of America (which borrowed $91.4B) off for its crimes for a mere $20B or so.

And, for the most part, all those corporations that secretly sucked of the Fed’s teat are still in business, gleefully lecturing others about moral hazard.