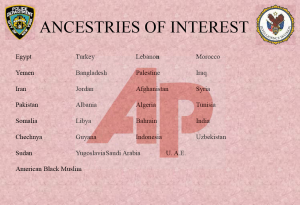 As they report, the domestic spying program employed a “Demographics Unit” that mapped out “ethnic hotspots” in the NY city area.

The program, it seems, would not even (and, as I’ve noted, did not even) accomplish what it aspired to do. While the ancestries of interest included far more nationalities than the federal government’s National Security Entry-Exit Registration System (which served a slightly different kind of ethnic profiling), adding obvious countries like Somalia and allies like Bahrain or Turkey, as well as the “American Black Muslim” ethnicity, it leaves out Nigeria (the Undie-Bomber’s nationality) and all South East Asian Muslim nationalities save Indonesia. Moreover, the group did not, apparently have the linguistic capabilities to infiltrate those groups (a slide lists Arabic, Bengali, Hindi, Punjabi, and Urdu as its linguistic capabilities).

And among the other details from the program, I find one more admission to be telling: the unit aspired to,

Identify and map ethnic residential concentrations within the Tri-State area.

Last week, I noted that the NYPD might have explained that they missed Faisal Shahzad because he lived in CT and received funds from Pakistan via a hawala on Long Island. But clearly both would fall within the scope of NYPD’s aspired goals (if not within its legal jurisdiction).

In other words, as comprehensive as this ethnic profiling program aimed to be, not only did it fall short in conception, but (by missing Shahzad and Najibullah Zazi) in execution.