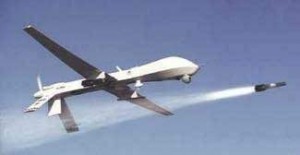 Sensing an opportunity to add to his “tough on terrorism” credentials, Senator Lindsey Graham (R-SC) can’t help but join in the DoD’s line of argument:

However, there is a huge problem with the entire premise of this argument.  It is extremely difficult to know with certainty who the high level and low level personnel are within any terrorist group.  For example, earlier this month, we had this sobering reminder about the accuracy of targeting in night raids, which face many of the same targeting issues as drone strikes:

Every JSOC raid that also wounded or killed civilians, or destroyed a home or someone’s livelihood, became a source of grievance so deep that the counterproductive effects, still unfolding, are difficult to calculate. JSOC’s success in targeting the right homes, businesses and individuals was only ever about 50 percent, according to two senior commanders. They considered this rate a good one.

If targeting for night raids by JSOC is only about 50% accurate, how low is the accuracy for CIA drone strikes?  The real world example of the strike carried out Sunday (DoD just couldn’t resist a strike on the the 9/11 ten year anniversary, could they?).  The New York Times dutifully announces in its headline that “C.I.A. Kills Top Queda Operative in Drone Strike”, even though later in the article it is admitted that:

Little is known publicly about Mr. Shariri, a Saudi whom a senior administration official said acted as a liaison between Al Qaeda and the Pakistani Taliban, the group that has directed a wave of attacks against Pakistani government installations and hotels frequented by Westerners. According to an Interpol alert, Mr. Shariri was 33.

Pakistan will not confirm Shariri’s death or identity, according to Reuters:

Pakistan had no confirmation on Friday that al Qaeda’s chief of operations in the country had been killed in a recent drone strike in the northwestern tribal region, as reported by American officials.

Further, Pakistani intelligence officials spoken to by Reuters claimed they had no knowledge of Shariri:

Intelligence officials operating in the tribal regions near the Afghan border also had no information on al Shahri.

“We have neither heard of this man operating in this region, nor can we confirm his death,” said one.

With the identity of even high level terrorists so difficult to pin down, arguing in favor of allowing the targeting of low level terrorists seems to get dangerously close to a system where entire regions are targeted.  It’s nice that Lindsey Graham and Jeh Johnson can be so certain in their pronouncements because if I were in their positions, I’d be a lot more concerned about the reliability of the intelligence underlying all targeting decisons.