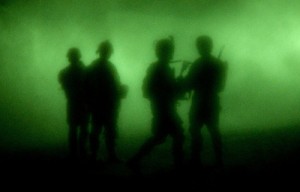 Civilians feel caught between the warring parties, and often blame international forces. As one man from Nangarhar, interviewed in the report said, “They claim to be against terrorists, but what they are doing is terrorism. It spreads terror. It creates more violence.” Weak accountability mechanisms where civilian casualties and mistaken detention occur and a failure to explore alternatives to night raids further increase anger over the raids.

Moving to the report itself, we find in the Executive Summary that the estimate of 20 raids per night applies to the period of December 2010 to February 2011.  The rate likely has continued to increase, as they received one report that there may have been as many as 40 raids per night in April 2011.

In perhaps the most telling sentence of all in the report, we learn that no evidence has been presented justifying the reliance on night raids: “International military officials argue that the increase in night raids has been their most successful strategy in the last year, although they have offered no evidence to support these claims.”

Furthermore, despite the improvements in accuracy, as the rate of night raids has increased, the criteria under which Afghans are detained have been loosened:

However, many of these improvements have been undermined or overshadowed by the surge in night raids. Although intelligence improvements have reduced mistaken night raids on civilian homes, the increased number and scope of night raids put many more civilians at risk than past intelligence flaws ever did. Many more activities may lead individuals to be detained in night raids, including the provision of food or shelter (under duress or not). In many cases, non-combatants appear to be subjected to night raids due to their proximity to insurgent activities, or incidental information about insurgent groups, rather than due to their actual conduct or status. As a result, far more non-combatants are detained in a year. Though the majority of non-combatants are soon released, the experience may result in lasting physical, financial, and emotional harm. International military typically release individuals by first handing them over to Afghan custody, where they can suffer poor conditions or even abuse rising to the level of torture.

And note that last sentence in the quoted passage: wrongly detained civilians are released to Afghan custody where they can be subjected to torture.  That seems like a recipe for ensuring a healthy insurgency: detain innocent civilians under false pretenses and then subject them to torture before they are released to return home.

Finally, the report goes into significant detail on the international law implications of practices where large numbers of civilians who are not Direct Participants in Hostilities (DPH) are detained:

In addition to the above DPH concerns, large-scale detention or clearing operations raise further concerns about arbitrary detention. Individuals may be detained incidentally as part of a broader operation, often as a matter of military necessity. But operations that deliberately target and round up civilians not themselves suspected of DPH or being security threats, but only in order to subject them to interrogation and screening may constitute an arbitrary deprivation of liberty and constitute inhumane treatment in violation of Common Article 3 to the four Geneva Conventions.

Under international law, detentions must be made on an individualized basis and may not be imposed as collective punishment or based on arbitrary or discriminatory grounds. Detaining civilians simply because they live in a particular area or are of a certain age, gender, nationality, or ethnicity may be arbitrary or even discriminatory detention in violation of Common Article 3, which expressly requires humane treatment of civilians without any “adverse distinction” including difference of treatment based on race, religion, birth, or other similar criteria.

So, despite the fact that security in Afghanistan is at its worst level ever, foreign forces in Afghanistan continue to insist that night raids are their best tool for achieving security.  They provide no justification for this claim even when significant data exist to suggest the raids themselves provide significant enthusiasm for the insurgency.  The US has invested trillions of dollars, thousands of lives and ten years in this effort that is no closer to success today than on the day we invaded Afghanistan.