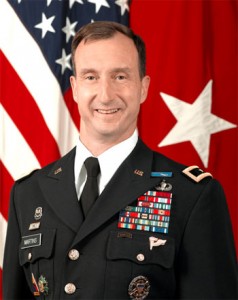 On Sunday, Carol Rosenberg informed us that there will be a new Chief Prosecutor in charge of military commissions at Guantanamo:

The Obama administration’s handpicked choice to run prosecutions at the Guantánamo war crimes court is pledging a new era of transparency from the remote base, complete with near simultaneous transmissions of the proceedings to victims and reporters on U.S. soil.

Army Brig. Gen. Mark Martins made the disclosure in a profile published Sunday in the Weekly Standard that likened the West Point, Oxford and Harvard Law graduate to a James Bond-style problem solver. It also cast Martins as “The Rebrander” of the at-times denounced military commissions system, which Barack Obama scorned as a candidate and senator then reformed with Congress as president.

Despite the Weekly Standard’s fawning profile of Martins as some sort of savior to the system who will lend an air of legitimacy to the military commissions, Martins is in reality a hack who is dragged out periodically by the Pentagon to cover up its worst abuses. Martins was chosen by Obama to head the committee that attempted to re-brand indefinite detention as legal, has served as Commander and Deputy Commander of JTF 435, the notorious JSOC group charged with running detention programs in Afghanistan, has served as legal adviser to David Petraeus, and, in the most outrageously named position of all, now commands “the newly established Rule of Law Field Force-Afghanistan”.

Here is how Martins’ recent positions are spun in his official biography from which I took the quote on his current position:

Martins’ career, then, consists of using his “West Point, Oxford and Harvard Law” degrees to cover up the blatantly illegal indefinite detention policy of the US, along with justifying torture and improper arrest of civilians in night raids in Afghanistan.

Back in April of 2010, I described how Martins had been chosen first to review detention policy and then to go to Afghanistan to implement the “new” policy he had designed. Here is how that description ended:

I fail to see how the process described above is any kind of improvement in achieving release of prisoners who have been improperly detained. This description of the process also serves to expose as a sham the entire Special Task Force’s charge of improving how the US handles prisoners. And right in the middle of this mess is Obama’s hand-picked (through Gates) architect of the process, who now is dutifully overseeing its implementation.

There is no getting around the fact that it would have been known that Martins would come up with a program designed to continue the efforts to cover up the imprisonment of innocent citizens. As I noted above, his previous assignments overlap with previous significant cover-ups. Also, as just one more example, Martins wrote an article (pdf) in 2004 that lovingly described the legal justification for the Commander’s Emergency Response Program (CERP) in Iraq. This program was in reality so loosely set up that it has been the subject of significant attention for misuse of funds.

So while there is perhaps an improvement of conditions for reporters such as Rosenberg who will be covering the proceedings of the military commissions with the advent of near real-time broadcasts of the hearings, don’t expect any sudden changes in favor of the rule of law. Mark Martins has built his career around covering up the worst of Pentagon abuses and he now is in charge of covering up what can be considered its most prominent legal quagmire. Martins was chosen for this position precisely because the Pentagon knows it can count of him to promote the status quo while lending a false air of legitimacy.