Why Blame the Failure of the 50-State Settlement Solely on Tom Miller? 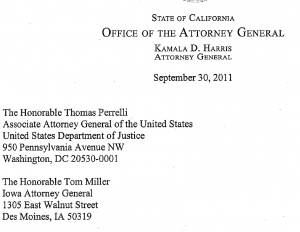 California Atty. Gen. Kamala Harris will no longer take part in a national foreclosure probe of some of the nation’s biggest banks, which are accused of pervasive misconduct in dealing with troubled homeowners.

Harris removed herself from talks by a coalition of state attorneys general and federal agencies investigating abusive foreclosure practices because the nation’s five largest mortgage servicers were not offering California homeowners relief commensurate to what people in the state had suffered, a person familiar with the matter said.

The big banks were also demanding to be granted overly broad immunity from legal claims that could potentially derail further investigations into Wall Street’s role in the mortgage meltdown, the person said.

With CA–the largest state and the one with the greatest foreclosure exposure–this effectively kills the settlement. See DDay for more on why Harris made this decision and what it means going forward.

But Harris’ letter announcing her decision makes something else (which had become increasingly obvious in recent weeks) clear.

This failure has become Perrelli’s baby as much as it is Miller’s.

When they held their last ditch attempt to save this meeting last week, they met in DC, not in IA or some other central location. And the settlement reportedly discussed at that meeting was heavily skewed towards giving the same people who fucked up HAMP another shot at trying to solve the housing situation.

About 80 per cent of the settlement figure, earmarked for the federal government, could be used to fund another round of debt and payment reductions for struggling US homeowners, people with knowledge of the Illinois document said. That would be split between principal reductions on first-lien mortgages and junior liens; payment forbearance for unemployed borrowers; and short sales, blight remediation and transition assistance for homeowners to move into rentals.

The remainder, about $4bn-$4.4bn in cash, could be designated for the states, which then would divide the proceeds to fund a variety of programmes, including assistance to borrowers. About half that amount could be used to pay up to $2,000 to an estimated 1.1m aggrieved borrowers who allege they were harmed by improper practices. [my emphasis]

So when Harris wrote…

Last week, I went to Washington, D.C. in hopes of moving our discussions forward. But it became clear to me that California was being asked for a broader release of claims than we can accept and to excuse conduct that has not been adequately investigated. In return for this broad release of claims, the relief contemplated would allow far too few California homeowners to stay in their homes.

What she was saying, politely but nevertheless saying, is that giving a state like CA that has been devastated by foreclosures perhaps $500 million to deal with the aftermath, and in the process let the banks off the legal hook for abuses beyond just robo-signing just won’t fly.

The Obama Administration may have been offering Harris less than $1,000 per each new homeowner who has fallen into default (to say nothing of all the previous foreclosures), whereas in a state settlement, NV Attorney General Catherine Cortez Masto was able to get about $57,000 per affected homeowner in a Morgan Stanley settlement.

That tells you two things. First, the Obama Administration still doesn’t understand the extent of the damage the banksters they are trying to protect have done. They don’t understand the scale of the challenges facing states and towns and homeowners affected by the banks’ crimes. And second, the “Department of Justice” was ready to sign away justice for scraps with which to fund another ineffectual Treasury-run program without, first, having forced the banks to face the full consequences of what will happen if they don’t offer principal write-downs.

In other words, if you didn’t already know it, DOJ was (and presumably still is) actively looking for ways not just to ignore the banksters’ crimes, but to help them avoid the non-legal consequences of those crimes, too. Which sort of explains the vitriol directed at Eric Schneiderman of late. Two prosecutors, after all, can conduct a national investigation of the banksters’ crimes, DOJ, and the NY Attorney General. And by refusing to go along with the criminally stupid deal Perrelli was negotiating, Schneiderman has made it a lot harder for for DOJ to sponsor yet more injustice.