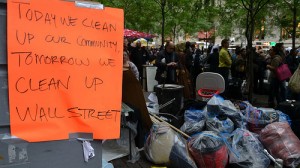 There had been fears of a standoff between New York officers tasked with clearing the park early Friday and protesters who wouldn’t budge. The city had ordered the protesters to leave by 7 a.m. so crews could clean the park.

But the protesters mopped, collected trash and scrubbed the pavement in the dead of the night as the Friday deadline neared for them to leave the premises for a cleanup. When the word of the postponed cleaning filtered through the more than 1,000 protesters who filled the park, they were elated.

What began about a month ago with a handful of protesters in New York City is now spreading across the globe:

The Occupy Wall Street movement has sparked nationwide protests in more than 1,400 cities, according to Occupy Together, which has become an online hub for protest activity.

It also inspired solidarity rallies on Thursday that were due to take place at more than 140 U.S. college campuses in 25 states, according to Occupy Colleges. Some social media photos showed about a dozen or so protesters at various colleges.

According to the website of United for Global Change, 15october.net/, there are 869 cities in 71 countries where protests are being planning.[sic]

Even here in lowly Gainesville, a small blue dot in the middle of the reddest portion of Florida, the occupy movement is alive. A permit was granted for protesters to sleep overnight in the downtown Bo Diddley Plaza Wednesday night, but protesters attempted to stay overnight Thursday night as well, leading to the arrest of Bo Diddley’s son, Ellas McDaniel:

Ellas Anthony McDaniel, 56, said he was charged with trespassing around midnight Thursday because he refused to leave the Bo Diddley community plaza after it closed as is customary at 11:30 p.m. McDaniel said he complained to police that he had not been read his Miranda rights.

“They said if I go back in there, I’ll be arrested,” McDaniel said. “I’m not a vagrant. My father wasn’t a vagrant. If he was a vagrant, they wouldn’t have named this park after him. He didn’t raise no vagrants. He raised men. He raised me to stand up for what I believe, because he stood up for what he believed.”

The arrests in Gainesville do not stand alone.  Cities across the US have varied widely in their responses to the protests, with some large scale arrests (hundreds were arrested as they took to the Brooklyn Bridge) and some cities, such as Los Angeles, working closely with protesters to assure peaceful protests with few to no arrests.

With the large number of protests planned around the world for tomorrow, this weekend should tell us just how much momentum the movement is gaining.  One of the primary reasons Brookfield Properties and Mayor Bloomberg (whose girlfriend is on the board of Brookfield) may have backed down from a confrontation today is that there was a growing belief that there is now sufficient attention on the protest that a major crackdown would lead to a huge outpouring of support for the movement with overwhelming numbers of people joining the protesters on the streets.  At the time of this writing, unconfirmed reports on Twitter indicate a significant police presence around Zuccotti Park and a few reports of individual arrests, but no massive police action appears imminent.

If there are indeed over 1400 different protests in the US tommorrow and nearly 900 more in international cities, it is clear that the protests are striking a nerve across the globe.  Although some attack the movement as lacking a clear purpose or set of demands, it seems to me that the resonant theme is that Wall Street represents the hub of a system which for too long has enriched a very few while relying on lax regulation, poor law enforcement and a purchased government to deprive everyone else of their resources and their opportunities.  This movement represents a growing awareness among the” 99%” that this situation is no longer sustainable.

How far will the movement go and does it have the potential to lead to real change?  Only time will tell, but if the movement maintains anything like its current momentum for a few more weeks, the possibility begins to look more like a probability.