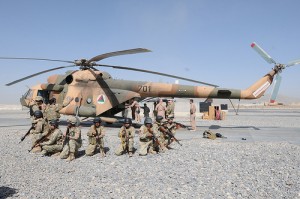 As the US stumbles around, trying to find its way out of a country it has occupied for over ten years, the path “forward” remains as murky as ever.  Just under two weeks ago, Secretary of State Hillary Clinton was chosen as the point person for introducing the new US catchphrase “fight, talk, build” that is meant to describe US strategy in the region.  As I noted at the time, the US seemed to completely miss the irony of using the country’s chief diplomat to introduce a new strategy that is based on the concept of shoot first and ask questions later.

We learn in this morning’s Washington Post that the US strategy of attacking the Haqqani network on both sides of the Pakistan border before starting serious efforts to hold talks with them has only increased the frequency of attacks from them.  As the remarkable passage from the Post below illustrates, the US had to endure no fewer than five large, high profile attacks from the Haqqani network before considering the possibility that the attacks could be a return of “fight” for “fight” and an attempt to improve the Haqqani position for later negotiations rather than the laughable early suggestion from the US that by resorting to more spectacular attacks, the Haqqanis were demonstrating that they had been weakened significantly:

This official and others acknowledged that the success of the strategy, which Secretary of State Hillary Rodham Clinton has described as “fight, talk and build,” depends on a positive outcome for several variables that currently appear headed in the wrong direction.

The attacks were the latest in a series of spectacular insurgent strikes that have made reconciliation seem remote. In September, the Pentagon blamed the Haqqani network for a truck bombing of a combat outpost west of Kabul that wounded 77 U.S. troops and for an assault by gunmen on the U.S. Embassy in Kabul.

A week after the embassy strike, a suicide bomber killed Burhanuddin Rabbani, the head of Afghanistan’s High Peace Council, which is in charge of reconciliation negotiations for the government.

U.S. officials have said they were unsure whether the attacks were a reflection of insurgent military weakness, a rejection of talks or a burst of aggression designed to improve the militants’ negotiating position — similar to the escalation of U.S. attacks on the Haqqani network.

That bit at the beginning should not be overlooked: the success of the “fight, talk, build” strategy “depends on a positive outcome for several variables that currently appear headed in the wrong direction.”  Mechanisms for reversing the current direction of these variables are not presented in the article.

Meanwhile, the first in a series of “conferences” has gotten underway in Turkey, with Afghan President Hamid Karzai meeting directly with Pakistan’s President Asif Ali Zardari. Parallel meetings between the two countries’ top military officers are also taking place. Clinton had been scheduled to join the conference tomorrow, but her trip was canceled yesterday, apparently because of her mother’s ill health (Update: there are reports on Twitter that Dorothy Rodham has died).  It looks as though the US feels talking can wait, as no replacement for Clinton at the conference has been announced.

While the Obama administration begins to think about preparing to maybe get the Pentagon perhaps to agree to withdraw a few more troops out of Afghanistan,  we see the terrain being softened a bit more for the eventual realization that all of the US efforts  and investments in “training” Afghan forces are destined for failure.  It appears from this article that David Petraeus, who is touted in the press as responsible for training when it is described as being successful, will escape blame for the failure in Afghanistan because William Caldwell is described in the article as having “overseen all NATO training in Afghanistan for the past two years”.  In true Petraeus fashion, the slate for the previous eight years is not just wiped clean, but ceases to exist.  Petreaus’ name does not appear in the article.

There is one truly refreshing bit of honesty that breaks through into the Reuters piece on training of Afghan troops:

But senior U.S. military officials admit that money has not always been spent in the wisest ways.

“We have received an awful lot of money from the U.S. government. We need to use it differently now,” said U.S. Army Major General Peter Fuller, deputy commander for programs and resources within the NATO training mission.

Another U.S. official in Kabul, who spoke on condition of anonymity, said the mission was buying up high-tech equipment to satisfy Washington, while more basic needs were ignored.

Yup.  “Training” Afghan forces turns out to be nothing more than an exercise in further lining the pockets of military contractors and the lawmakers who benefit from their lobbying.  With that driving force in mind, efforts to achieve a true exit from Afghanistan will face fierce resistance in Washington.