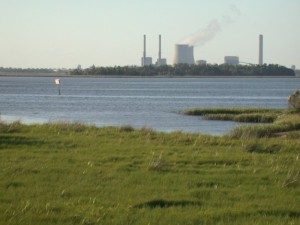 The Crystal River nuclear plant, seen from across adjacent wetlands, back in 2007 when it was actually functional. (Wikimedia Commons)

Almost single-handedly, reporter Ivan Penn at the Tampa Bay Times (formerly known as the St. Petersburg Times) has been informing the world of the disgusting spectacle taking place only sixty miles southwest of my home at the Crystal River nuclear power plant in Florida. The plant has been shut down since Progress Energy decided in 2009 that they could save $15 million in the costs of managing the replacement of the plant’s steam generators by managing the project itself. The ongoing mismanagement of the project has resulted in at least three major cracks in the containment building for the reactor and a projected cost of at least $2.5 billion to repair a plant that was designed to operate only through 2016. The second crack came when repairs were attempted on the first crack. And yes, these crackers just couldn’t learn, and the third crack came while they were contemplating how to repair the second crack instead of bringing in experts who actually knew what they were doing.

In a November 6 article from this year, Penn describes many of the details above about how Progress Energy chose not to use one of the two experienced engineering firms to manage the project in order to save $15 million in management fees. But because representatives of one of those firms, Bechtel, were present as part of the construction phase of the project, Progress still received warnings about the strategy they had chosen:

Charles Hovey was an experienced construction foreman who had worked on similar projects at other nuclear plants. Progress, he observed, planned to use a different procedure to cut into its containment building.

“I have never heard of it being done like this before and I just want to express my concerns to you one last time.”

“Why are we doing tendons different here than all other jobs?” site supervisor John Marshall asked in an e-mail sent to Sam Franks, another Bechtel supervisor.

The “tendons” are steel cables that reinforce the concrete slabs from which the containment building is constructed.  Before cutting into a slab, as Progress planned to do in order to replace the steam generators, it is necessary to loosen the tendons.  All previous projects had loosened the tendons non-sequentially, while Progress decided, inexplicably, to loosen them sequentially. Furthermore, previous successful projects involved loosening all tendons prior to cutting, but Progress chose to loosen just less than half.

On November 5, Penn addressed the prospect of the repairs at Crystal River being covered by insurance:

Progress Energy’s insurer has launched its own review of the outage at the Crystal River nuclear plant to determine whether insurance will cover repairs to the broken reactor building.

Bill Johnson, Progress’ president and chief executive officer, told investors Thursday that the utility’s insurer has appointed a special committee of its board and hired engineering consultants to review the Crystal River plant.

Progress wants the insurer, Nuclear Electric Insurance Limited (NEIL), to cover three-quarters of the $2.5 billion it will cost to fix the nuclear plant, which first broke during a maintenance and upgrade project in fall 2009. Costs not covered by NEIL would rest on the shoulders of the utility’s customers or investors.

And there’s one more tidbit about NEIL in the article:

“This is a complex matter, and it’s in our best interest to work cooperatively with NEIL to provide them with all the information they need to make their coverage decisions,” Johnson, who sits on NEIL’s board of directors, said during a quarterly report webcast Thursday.

Yup, that’s right. The CEO of the company that caused this craptastic adventure also sits on the board of the insurer that will decide whether to cover the fiasco.  Conflict of interest much?

Here is how NEIL describes itself on its website (this is a screencap since the text on the page can’t be copied:

And Johnson is not alone.  A quick review of the NEIL Board of Directors finds a token insurance executive, a token banker and a token legal expert, but the bulk of the board consists of nuclear energy company executives.  Even if Johnson recuses himself, it’s hard to see NEIL not choosing to cover Progress Energy’s mistake, even though Penn points out that Progress has not received any payments from NEIL for repair work done in the last year.

And just to drive home the folly of Progress’ efforts, here are a few excerpts from Penn’s article on the third major crack:

Staff of the Public Service Commission did not hear about the third crack until Oct. 18, when a Progress engineer, John Holliday, made passing reference to it in a deposition. He was asked about his role in the Crystal River repair after the first crack shut down the plant in 2009.

“We’ve had two more” cracks, Holliday said. “Both of those (cracks) are larger” than the first.

But it gets better:

Six 42-inch-thick concrete panels form the walls of the containment building — the final barrier against deadly radiation escaping into the atmosphere during an accident. Three of those panels have suffered serious cracking, or “delaminations” in engineer-speak.

Panel 3 broke in October 2009, as workers cut a 25-by-27-foot hole in the concrete wall to replace steam generators inside the building.

Panel 1 broke in July, while Progress tried to figure out how to repair panel 5.

So far, it is expected that Florida rate-payers will bear at least one fourth of the cost of the repairs to Crystal River.  Should NEIL miraculously refuse to cover the remaining loss, it will be very interesting to see just how that cost gets split among Florida rate-payers and the stockholders of Progress.  Either way, though, it will be Florida’s customers of Progress who will bear the bulk of that burden.

There is one small glimmer of hope against that development, though:

Florida’s Public Counsel J.R. Kelly calls the separation of a concrete wall at Progress Energy Florida’s Crystal River-3 nuclear unit “a huge construction negligence case,” and says that Progress does not appear to have been very prudent in its decision making.

“Right now we are smack dab in the middle of discovery and depositions, and we have not formulated a final position on” whether Progress Energy prudently managed the steam generator replacement project, Kelly said.

“But a lot of signs are certainly leading us to believe that Progress was not prudent in its decision-making … If that turns out to be the case, we will argue very strongly [to the Florida Public Service Commission] that ratepayers should not have to bear the costs” of repairing Crystal River and providing replacement power. “This is becoming a huge construction negligence case,” he added.

What becomes especially enraging about this entire spectacle, though, is that this plant is only slated to operate through 2016 and the request by the industry in general to extend first generation plants from a 40 year to a 60 year lifespan has not yet been approved:

The Crystal River plant is hardly new. It’s just a few years away from reaching its 40-year lifespan, when the industry originally intended to shut down and decommission its first-generation plants.

Now power companies want federal permission to continue operating their aging nuke plants for another 20 years. In Crystal River’s case, that means extending the life of the plant from 2016 to 2036.

Here’s the trick. Progress Energy says it will spend billions to fix its broken nuclear plant. But the company still lacks an explicit okay from the feds to run the plant until 2036.

So the bottom line is that Progress Energy is seeking $2.5 billion in insurance funds to repair a plant that could have only two years left in its licensed lifespan once repairs are complete. How can that be a prudent investment?