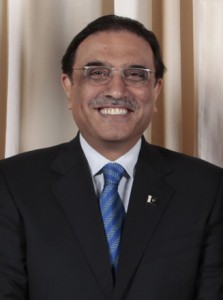 Late Tuesday afternoon, Twitter was awash in a flurry of rumors on the status of Pakistan’s President Asif Ali Zardari. One tweet that was repeated over and over stated that Zardari had been sedated, flown to Abu Dhabi, and would leave as soon as possible for London due to a medical condition. Then Josh Rogin put up a story at Foreign Policy stating that Zardari was in Dubai after complaining of chest pains and that there was a possibility that he would resign before returning to Pakistan. After first stating that Zardari was in Dubai only for medical tests relating to a known previous heart condition, the Pakistani government later stated that Zardari had suffered a minor heart attack and was in Dubai for treatment, which many have described as angioplasty.  Zardari is expected to return to Pakistan soon.

The tweet that set things off appears to have come from Najam Sethi, whose twitter profile lists him as “Editor, The Friday Times, & Group Advisor GEO TV; Senior Fellow New America Foundation, Washington DC; Eric Lane Fellow Clare College Cambridge University UK”. Although the tweet doesn’t seem to be in his timeline now, retweets put it as: “Prez Zardari sedated and taken to hosp in AbuDhabi. He will go to London asap. Faranaz Ispahani with him but not HH!” Tweets that are still in his timeline state that he meant to say Dubai, but he had just returned from Abu Dhabi and typed that instead. There is an additional tweet stating that he still expects Zardari to go to London.

Faranaz Isphahani is Zardari’s spokeswoman, “HH” is presumed to refer to former US Ambassador Husain Haqqani, who resigned in the memo scandal and has been placed on the Exit Control List, preventing his exit from Pakistan.

An even higher level of Twitter activity ensued after Josh Rogin Tweeted a link to his story at Foreign Policy.  The key aspect to Rogin’s story was information received from “a former US government official”:

A former U.S. government official told The Cable today that when President Barack Obama spoke with Zardari over the weekend regarding NATO’s killing of the 24 Pakistani soldiers, Zardari was “incoherent.” The Pakistani president had been feeling increased pressure over the Memogate scandal. “The noose was getting tighter — it was only a matter of time,” the former official said, expressing the growing expectation inside the U.S. government that Zardari may be on the way out.

The former U.S. official said that parts of the U.S. government were informed that Zardari had a “minor heart attack” on Monday night and flew to Dubai via air ambulance today. He may have angioplasty on Wednesday and may also resign on account of “ill health.”

Rogin then went on to quote another source on a potential coup:

“If true, this is the ‘in-house change option’ that has been talked about,” said Shuja Nawaz, director of the South Asia Center at the Atlantic Council, in a Tuesday interview with The Cable. Nawaz said that under this scenario,  Zardari would step aside and be replaced by his own party, preserving the veneer of civilian rule but ultimately acceding to the military’s wishes to get rid of Zardari.

Rogin later provided this update to the story:

UPDATE: A Pakistani source close to Zardari e-mailed into The Cable to say that Zardari is simply ill and is not stepping down. Rumors of Zardari stepping down might be part of a behind the scenes power play but Zardari confidante Senate Chairman Farooq Naek will be acting president while Zardari is out of the country and Gilani remains loyal to Zardari, flanked by Zardari’s son Bilawal. “The rumors of a silent coup are sometimes a way of trying to effect a silent coup. It won’t happen,” the source said.

All other reporting on the incident is more consistent with the story of medical treatment in Dubai with Zardari’s return expected.  From the Express Tribune:

President Zardari suffered a “minor heart attack” and was in Dubai for a small operation and said that he will return to Islamabad on Thursday as he was in good health, a minister confirmed earlier on Wednesday.

Mustafa Khokhar, minister in charge of human rights, told AFP that despite media reports there was “no question of any resignation” by Zardari, who is under pressure over a scandal that saw his ambassador to the US step down.

“He had a minor heart attack on Tuesday. He flew to Dubai where he had an angioplasty. He’s in good health now. He will come back tomorrow. There’s no question of any resignation,” said Khokhar.

The difficulty in determining just what is taking place is increased by the history of coups in Pakistan.  From the Washington Post:

The departure was enough to set a country with a history of military coups, and where no elected government has ever lasted a full term, aswirl with rumors. According to some theories, the army had urged Zardari to step aside and he elected to do so outside the country — perhaps to avoid prosecution for various allegations of corruption.

Zardari was elected in September of 2008 and new elections are not expected until 2013 (when it is possible Pervez Musharraf will run again), so there is still over a year to go if Pakistan is to maintain its record of no government ever serving a full term.

This is obviously a fluid situation and I will try to provide updates as new information becomes available. It should be kept in mind that if Zardari did suffer a mild heart attack and then was treated with angioplasty, patients in this situation often are discharged from the hospital the next day and are usually free to resume normal activities fairly quickly. Should the hospitalization continue into next week, then either the status of Zardari’s health or the status of the political situation should be assumed to be different from what has been reported.