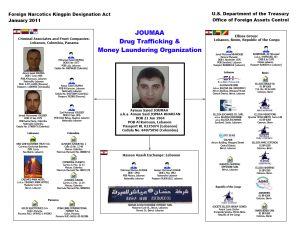 The government continues to crack down on Ayman Joumaa’s Hezbollah-tied money laundering ring, yesterday suing some exchange companies and the auto dealers tied the ring.

The announcement reads like a Bush Axis of Evil speech, emphasizing the role of Hezbollah even though just “tens of millions” of the hundreds of millions involved went via one channel to Hezbollah.

A network of money couriers controlled by Oussama Salhab, an alleged Hizballah operative living in Togo, transported tens of millions of dollars and Euros from Benin to Lebanon through Togo and Ghana.

And another of the key players is actually a Christian group, albeit one closely tied to Hezbollah.

Another drug trafficking organization, which is led by Maroun Saade, is also involved in the transportation and distribution of large quantities of narcotics in West Africa. Saade is a member of the Free Patriotic Movement, a Lebanese Christian organization closely allied with Hizballah, and has provided extensive services to Hizballah members engaged in narcotics trafficking and bulk cash smuggling in West Africa.

And the geography the government paints has the same focus: Lebanon, Benin, and–in their larger claims–Iran and Venezuela.

Funny. They seem to be de-emphasizing two other countries that are–according to the Treasury Department–central to Joumaa’s network: Colombia, where all the drugs derive from, and Panama. Not only does Joumaa have two locations in Panama and three in Colombia, but he and several of his alleged network members carry Colombian or Panamanian ID (one also has a Venezuelan passport).

You know? Two of the three countries we signed trade agreements with this year, between the time Treasury first started cracking down on this network and now? Panama, which opponents of the trade deals noted would probably serve as a vehicle for financial entities to launder money?

Now, I look forward to seeing more of the network–particularly whether this is a drug cartel using the services of a terrorist organization (as it seems) or a(nother) terrorist organization getting into the drugs business. Not to mention whether Manssor Arbabsiar had ties to the auto dealer plot (though he doesn’t appear in the list of 30 sanctioned dealers).

But while you’re watching, it’s worth keeping in mind that the US just strengthened its alliance with two of the key countries involved in this network.