More Collateral Damage From Mad Rush to Rely on Drones 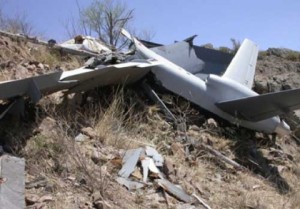 In relying so heavily on civilian contractors, the US is flirting with breaking the international laws of war.  Also from today’s article:

By law, decisions to use military force must be made by the military chain of command or, in the case of CIA strikes, by civilian officials authorized to conduct covert operations under presidential findings or other specific legal mandates.

Moreover, civilians are not subject to the Uniform Code of Military Justice, which subjects military personnel to prosecution for war crimes or for violations of rules of engagement on when to use force.

But this question of how we get to a kill decision has another facet to it as well. Earlier this week, the LA Times described the “death squads” roaming Pakistan’s tribal areas to extract revenge on those thought to have sold information to the US for use in targeting:

The death squad shows up in uniform: black masks and tunics with the name of the group, Khorasan Mujahedin, scrawled across the back in Urdu.

Pulling up in caravans of Toyota Corolla hatchbacks, dozens of them seal off mud-hut villages near the Afghan border, and then scour markets and homes in search of tribesmen they suspect of helping to identify targets for the armed U.S. drones that routinely buzz overhead.

Militant groups lack the ability to bring down the drones, which have killed senior Al Qaeda and Taliban commanders as well as many foot soldiers. Instead, a collection of them have banded together to form Khorasan Mujahedin in the North Waziristan tribal region to hunt for those who sell information about the location of militants and their safe houses.

Pakistani officials and tribal elders maintain that most of those who are abducted this way are innocent, but after being beaten, burned with irons or scalded with boiling water, almost all eventually “confess.” And few ever come back.

The deaths doled out by the Khorasan Mujahedin undoubtedly do not go into the official death tolls from drones, but it seems likely that they do indeed increase the death toll of innocent civilians. With the recent reduction of US personnel on the ground within Pakistan from 400 to 100, it now will be even more difficult to obtain human intelligence for use in target selection. Despite that complication, I’ve seen no indication that the US intends to back off from its current strategy of attacking both mid-level operatives and high-level commanders with drones.

Oh, and when getting targeting information directly from government sources in unstable areas, it seems the US is open to being played at times:

Top U.S. military leaders who oversaw missile strikes last year against al Qaeda targets in Yemen suspect they were fed misleading intelligence by the country’s government and were duped into killing a local political leader whose relationship with the president’s family had soured.

On May 25, 2010, a U.S. missile attack killed at least six people including Jabir Shabwani, the 31-year-old deputy governor of Yemen’s central Mareb province. The Yemeni government provided intelligence used in the strike but didn’t say Mr. Shabwani would be among those there, say several current and former U.S. military officials.

These people say they believe the information from the Yemenis may have been intended to result in Mr. Shabwani’s death. “We think we got played,” said one participant in high-level administration discussions.

Realizing just how stupid this made the US look, it appears that John Brennan was “pissed” about being played in this way (of course, Marcy figured out we got played months before the WSJ did):

“Permissions are harder to get,” a participant in the discussions said of the process of adding new targets. “Brennan wants to make sure we don’t get played again.”

However, as long as Brennan and Obama continue to expand the drone program beyond the infrastructure and intelligence gathering capabilities of the moment, more instances of incorrect targeting by both military and civilian analysts as well as “being played” by “allies” are inevitable. Despite the allure to Brennan and Obama that drones are somehow magic, clean ways to take out enemies, they are fraught with all the same real world problems as any other tool of war. Collateral damage is always a risk in actions of war and the damage is no less real when the weapons are controlled from a distance.