Sometimes you see things that just make you shake your head and say “what the hell is going on here?”

Here we are at the start of the NFL Playoffs – the always thrilling, and often surprising Wildcard Weekend – topped off by the Saturday night special featuring the Detroit Kitties first return to the playoffs since the late 1990s. And Marcy is going to be getting her culture on at a staging of Battleship Potemkin.

Yes, you read that correctly. We have here a playoff game with two, count em two, 5,000 yard passers. Yep, while all the focus down the stretch was on Drew Brees, Aaron Rodgers and Tom Brady, Matt Stafford quietly put up one hell of a season and eclipsed the magic 5,000 yard barrier. In short, he has been great and along with a semi-healthy MegaTron Johnson, gives the Lions a puncher’s chance tonight. One other thing about Stafford, while he did give up 16 picks this year, 9 of them came when he was struggling with a protective glove over a broken index finger. That has mostly resolved and Stafford was money down the stretch. Also, the Kitties have their defensive backfield back to full strength with the return of Louis Delmas and CB Aaron Berry. The Saints are, of course what we thought they were. Flat out bad ass nasty good on offense led by the field general Brees and Darren Sproles chewing up ground. The Saints’ O-boys can get some game on, but their defense is not what it was in the Super Bowl run two years ago. 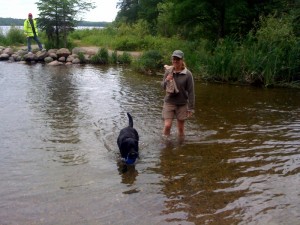 I won’t bet any money on it, but the Lions are more than capable of winning this game over the Saints, and it should be a LOT of fun to watch. Well, that is, assuming you are actually watching the game and not Battleship Potemkin! Which brings up the collateral damage problem. McCaffrey. You see McCaffrey LOVES him some football, and must be in the throes of despair at not being able to watch the Kitties and Saints like other rational American dogs. McCaffrey, seen at left during happier times, is considering filing a lawsuit for emotional distress. Soon as he puts his paw print on the contingency fee agreement, we are off!

The early game on Saturday is Bengals at Texans. If the Texans were at full strength, this is not close. But Matt Schaub is done for the year and Houston is going with rookie TJ Yates, who has a bruised up left shoulder, with Jake Delhomme in reserve. Andre Johnson should play, but is clearly still fairly hobbled. Linebacker Mario Williams also out. Houston really backed in to the playoffs with three losses to close out the season, but do have a great ground game. The Bengals did not exactly light it up down the stretch, but did really shows signs of maturing as a team, and Andy Dalton looks very much like a professional QB rather than a rookie. Edge to the Bengals.

The early game Sunday is Dirty Birds at Gents. If this game was in Hot’Lanta, I think it is not even close. But in NY (okay New Joisey), it is a tossup. The Giants defense seems to be gelling at just the right time and the running game is coming around a little. Atlanta despite the stability that should come from the air/ground combo of Matt Ryan and Michael The Burner Turner, has tendencies to be flaky. Probably all comes down to whether Good or Bad Eli shows up. Bet here is that it is Good Eli and the Giants boasting is correct, they are going to be a tough out in the playoffs.

The late game Sunday is, of course, The Tebowl. Stillers are gonna go pay their respects to Baby Jesus at the Mile High Mount. Probably won’t be much actual respect shown though. Big Ben is gimpy, and Ryan Clark is staying home because of the altitude and his sickle cell issue. And the Steelers have other health issues and blah, blah, blah. They are still the Steelers and Tim is still Tebow, great heart and no arm. Is it possible for the Broncs and Baby Jesus to pull off a shocker and win? Sure, but not damn likely.

This will in all likelihood also be the designated Trash post for Monday’s BCS Championship game. Not much to discuss there, we have already seen this game, it is just that the craptastic BCS is making us watch it again. Both are excellent teams, and both have killer D’s. But, just like last time, the slight edge goes to Honey Badger and LSU.

Throw down some Trash people!