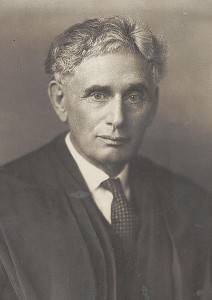 In a government of laws, existence of the government will be imperiled if it fails to observe the law scrupulously. Our Government is the potent, the omnipresent teacher. For good or for ill, it teaches the whole people by its example. Crime is contagious. If the Government becomes a lawbreaker, it breeds contempt for law; it invites every man to become a law unto himself; it invites anarchy.

Gosh, Brandeis had such a quaint view on the need for the government to adhere to the rule of law. If only that attitude were more prevalent today. Sadly, both the executive and legislative branches of today’s US government seem to view such an attitude as outdated.

More details on the crisis come from AP:

The conflict with the court has been brewing since 2009, when judges struck down an amnesty protecting President Asif Ali Zardari and hundreds of other politicians from prosecution on graft and other charges, and ordered cases against them reopened. The government has resisted doing this, arguing that the president has immunity from prosecution.

Some independent commentators say the Supreme Court, which in the past has frequently been dragged into political disputes and on three occasions sanctioned military coups, is hostile to the current administration and is working with the army to oust it by “constitutional means.”

A five-judge panel accused the government of “willful disobedience” and said “the buck stops” at the office of Prime Minister Yousuf Reza Gilani, who it said was “dishonest.” The ruling warned that the court could declare him unfit to hold office and dismiss him if he does not implement its earlier verdicts.
It ordered the attorney general to appear before the court next week to explain the government’s foot dragging.

With only one week to respond to the Supreme Court, it appears that the Zardari government is now backed into a corner, especially with constitutional issues also looming over the memogate controversy. If the analysts cited by AP are correct that the court is now siding with the military, they have now set the stage to begin dismantling the government as early as next week.