After Trading Jobs, Petraeus and Panetta Have Traded Sides in Military vs. Intelligence Differences 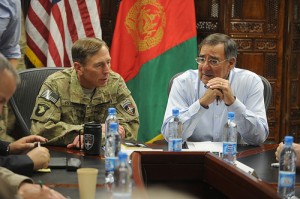 What is remarkable about these two responses from the military (and the two analyses from the intelligence community) is that the two most visible heads of these communities have traded places between the two reports being issued. At the time of the 2010 report, Leon Panetta was Director of the CIA. He now is Secretary of Defense. David Petraeus headed US and NATO forces in Afghanistan at the time of the 2010 report and now has replaced Panetta as head of CIA.

As the Los Angeles Times article points out, Petraeus signed onto the 2010 dissent to the NIE and that fact came up during his confirmation hearings for the CIA position:

Army Gen. David H. Petraeus wrote a dissent to last year’s NIE when he was U.S. commander in the war. He is now CIA director, and he pledged during his Senate confirmation hearings not to allow his personal views as a former commander to color the CIA’s analysis.

My concerns when Petraeus was first suggested to head CIA went further than just relating to “his personal views as a former commander”. I feared putting him in a position to influence intelligence conclusions and wondered if he would engage in a bit of “resume polishing” by claiming military successes from his command time that weren’t warranted. After all, since there is such a behind the scenes push to prepare Petraeus for an eventual political career, as head of the CIA he would be in a position to make his own push in that direction.

That the new NIE doesn’t come to a more positive conclusion than the previous one is encouraging in light of the concerns described above. However, it should be kept in mind that the NIE is the product of a large number of intelligence agencies and not just the CIA. It would be very interesting to compare the 2010 and 2011 CIA analyses by themselves without the other agencies’ views being folded in.

Back when Petraeus was first being nominated to head CIA, Josh Rogin covered some of the concerns that were expressed about Petraeus being put into a role where he would be judging the outcome of his own previous work:

The leaked NIE caused a rift between the CIA and the Pentagon, with military officials claiming that the intelligence community was not up to date on progress is Afghanistan. With Petraeus now heading to the CIA, he will be charged with evaluating his own rosy assessments of the course of the war.

“The specific guy who was responsible for producing a positive prognosis is now going to a job where he has to judge his own prognosis and grade his own work,” said Stephen Biddle, senior fellow at the Council on Foreign Relations. “The institutional culture of the military is generally optimistic and can do. The institutional culture of the intelligence community is generally skeptical and pessimistic.”

“In Iraq, at CENTCOM and in Afghanistan, Gen. Petraeus has been a consumer of intelligence and has commanded DoD intelligence resources. But that is a different role than leading the top civilian intelligence agency. I look forward to hearing his vision for the CIA and his plans to make sure the CIA is collecting the type of intelligence that policymakers need,” she said in a statement e-mailed to The Cable.

At the same time, Leon Panetta now has assumed the role of saying we are winning instead of leading one of the agencies that points out the lack of measurable progress. From the Los Angeles Times article:

“We’re moving in the right direction and we’re winning this very tough conflict,” Defense Secretary Leon E. Panetta told troops on Dec. 14 at Forward Operating Base Sharana in the eastern province of Paktika.

Pentagon spokesman George Little said Wednesday that Panetta continues to believe there has been “substantial progress.” The key, he said, is “to strengthen Afghan security forces and to build toward a long-term relationship with Afghanistan.”

Isn’t it nice how our government’s movers and shakers can trade jobs with one another and quickly assume the required opposite sides of an argument from their previous positions? Was Panetta correct in 2010 or is he correct now? When was Petraeus right and when was he wrong? How can Congress and the American public make any sense of what Panetta and Petraeus say when they each have argued exactly opposite positions with only one year between changing sides of the argument? It would be very inviting to dismiss these differences as merely the result of Panetta and Petraeus being on opposite teams in a sport and being traded from one team to another between seasons. However, many lives and a huge amount of money are expended in Afghanistan, and the gaming merely serves to increase those losses. When the arguments are gamed, truth becomes yet another of the losses.