The False Report of Banned Books In Tucson: The Tempest in the Arizona Teapot 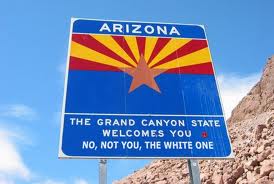 Last Friday afternoon, author Jeff Biggers published an article at Salon entitled Who’s Afraid of “The Tempest”? The cognitive lede, and framing for the article as a whole, is contained in the first sentence:

As part of the state-mandated termination of its ethnic studies program, the Tucson Unified School District released an initial list of books to be banned from its schools today.

Biggers goes on to report and discuss on a litany of books and textbooks – even Shakespeare’s The Tempest – that were removed from Tucson Unified School District (TUSD) classrooms:

Other banned books include “Pedagogy of the Oppressed” by famed Brazilian educator Paolo Freire and “Occupied America: A History of Chicanos” by Rodolfo Acuña, two books often singled out by Arizona state superintendent of public instruction John Huppenthal, who campaigned in 2010 on the promise to “stop la raza(sic).

It is a rather stunning, and alarming, report fashioned by Mr. Biggers and, little wonder, it swept like fire across the progressive internet, and social media like Twitter and Facebook over the King Holiday weekend. Biggers’ Salon article served as the basis for reportage of the banning of books, including Shakespeare’s The Tempest, in a plethora of media sources from such internet venues as AlterNet, to mainstream media like The Tucson Citizen, New York Daily News, and The Wall Street Journal.

There is only one problem with this story. It is categorically and materially false. No books have been banned in Tucson by the TUSD, much less Shakespeare’s classic, The Tempest.

Sensing that Biggers’ story did not sound correct, nor comport with my understanding of the law in this subject area here in Arizona, I was able to make contact with officials at TUSD over the Martin Luther King extended holiday weekend and spoke with an official on Monday, even though the school system was officially closed. It is an understatement to say they were dismayed and concerned; it is “disingenuous to say ‘banned'” said Cara Rene, Communications Director for the TUSD.

Indeed, upon returning to their offices Tuesday, the TUSD put out, through Ms. Rene, an official News Release stating:

Tucson Unified School District has not banned any books as has been widely and incorrectly reported.

Seven books that were used as supporting materials for curriculum in Mexcian American Studies classes have been moved to the district storage facility because the classes have been suspended as per the ruling by Arizona Superintendent for Public Instruction John Huppenthal. Superintendent Huppenthal upheld an Office of Adminstriation Hearings’ ruling that the classes were in violation of state law ARS 15-112.

The books are:
Critical Race Theory by Richard Delgado
500 Years of Chicano History in Pictures edited by Elizabeth Martinez
Message to AZTLAN by Rodolfo Corky Gonzales
Chicano! The History of the Mexican Civil Rights Movement by Arturo Rosales
Occupied America: A History of Chicanos by Rodolfo Acuna
Pedagogy of the Oppressed by Paulo Freire
Rethinking Columbus: The Next 500 Years by Bill Bigelow

NONE of the above books have been banned by TUSD. Each book has been boxed and stored as part of the process of suspending the classes. The books listed above were cited in the ruling that found the classes out of compliance with state law.

Other books have also been falsely reported as being banned by TUSD. It has been incorrectly reported that William Shakespeare’s “The Tempest” is not allowed for instruction. Teachers may continue to use materials in their classrooms as appropriate for the course curriculum. “The Tempest” and other books approved for curriculum are still viable options for instructors.

Oh, my, that is fundamentally and materially different than what Mr. Biggers both stated, and inferred, isn’t it? It was excessive and inflammatory hyperbole, and that is not a good thing as it paints the TUSD, and the Arizona school and educational system in a false, and prejudicially negative, light. I know many teachers and administrators in the Phoenix area, and they were outraged. “Banning of books” is an extremely negative concept both emotionally and legally; it is an extremely serious allegation, and not one to be made lightly or inaccurately.

There are a LOT of very good people in the State of Arizona, and the bad that is going on here (and there IS plenty of bad too) should be painted large and loud for what it is, but not in brush strokes so big and hyperbolic as to give a false picture of the story and state. I dislike the existence and effect of HB 2281, the law that has created this controversy over ethnic studies, every bit as much as Mr. Biggers honestly seems to; but do not want that to be used as a whipping post to make Arizona an ogre in ways it truly does not deserve. And that was the effect of his January 13, 2012 article in Salon.

You would probably think this particular story, and my report on it, ends here for now. It does not and, for once, that is a very positive thing. Over the King Holiday weekend, in addition to contacting the TUSD, I also contacted Salon regarding my concerns. They were, under the circumstances, both cordial and professional. Early this afternoon a notice of correction was placed at the bottom of the original story, and a new report by Jeff Biggers, far more accurately portraying the facts on the ground in Tucson, was published by Salon. Salon, and its editors, are to be commended and applauded for their willingness to listen and act responsibly.

Which brings us to the bigger picture. Demagoguery and hyperbole are something that all of us do who write on emotional hot button issues; which are about the only kind of issues we do here at Emptywheel. I have noticed the same phenomenon in the progressive blogosphere and media acutely prevalent on torture, Bradley Manning, Occupy Wall Street and, just recently, the NDAA. Emotion and illustration are good; facts and truth are better.