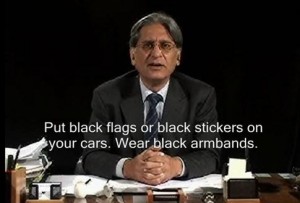 The Express Tribune has more on the issue of why Gilani did not write a letter to Swiss authorities, asking them to re-open their prosecution of Pakistani President Asif Ali Zardari:

Prime Minister Yousaf Raza Gilani appeared before the Supreme Court on Thursday in the contempt of court case against him and cited immunity for not writing a letter to the Swiss authorities.

“Before me, Zulfiqar Ali Bhutto, Nusrat Bhutto and Benazir Bhutto also faced courts,” Gilani said. He added that the legal background to why he did not write the letter would be explained by his counsel Aitzaz Ahsan.

Ahsan said that the prime minister was advised by the Law Ministry to not write a letter against the president. “I had been publicly saying that writing the letter would not make any difference,” Ahsan said.

I suppose it is not too surprising that Ahsan was chosen to represent Gilani, since Ahsan belongs to the PPP political party which Zardari heads, but because of how he helped to preserve the court against illegal actions by Musharraf, he seems likely to be highly respected by those on the bench.

Meanwhile, the Express Tribune also carries the news that ISI head Pasha will not be continuing in that position beyond March:

Given the spike in civil-military tensions, it comes as no surprise that the embattled government will not pursue any further extension to retain the services of Director General (DG) of the Inter-Services Intelligence (ISI) Lt General Ahmed Shuja Pasha.

To the contrary, the government is believed to be actively considering naming a successor before General Pasha’s extended tenure comes to an end on March 18. There have also been no indications that army chief General Ashfaq Parvez Kayani would be interested in an extension for the current DG ISI.

The appointment of a successor will assume greater significance in the backdrop of recent tensions. Even though the prime minister has the authority to appoint the future spymaster, it would be a rare move for the civilian government to take the decision without the military establishment on board.

The article goes on to mention potential candidates to replace Pasha:

Sources close to The Express Tribune have revealed that at least three names have surfaced for the post. Frontrunners include Chief of General Staff Lt General Wahid Arshad, Corps Commander Karachi Lt-General Muhammad Zahirul Islam and Corps Commander Peshawar Lt-General Khalid Rabbani. All three are to retire in 2014.

Another military source claimed that Lt-General Zahirul Islam is believed to be a strong contender for the position because of a previous stint with the ISI. Before being appointed Corps Commander Karachi, he was the head of ISI’s internal wing which dealt with counter-intelligence and domestic issues. However, there is no official confirmation on whether the army has formally forwarded the proposed names to the government.

The process of selecting a new ISI head will be an interesting dance among the Zardari government, the military and ISI. If Pasha can be replaced in a peaceful manner and with all parties satisfied with the choice, yet another potential disruption to civilian rule will have been avoided.

Reuters has the story on the likely re-opening of NATO supply routes:

The move suggests tensions with the United States and NATO have eased, but more progress is needed for the kind of cooperation necessary to fight militancy in the border region which U.S. President Barack Obama has called the world’s most dangerous place.

The official said the fees were designed to both express continued anger over the November 26 attack and raise funds for the state to fight homegrown Taliban militants blamed for many of the suicide bombings across the country.

“The tariffs will cover everything from the port to security to roads, which after all belong to Pakistan,” the security official, who asked to remain anonymous, told Reuters.

No date was given for reopening the supply routes. Pakistan’s trade ministry was working out details of the tariffs, said the official.

The same Reuters article goes on to suggest that peace talks between the Taliban and Pakistan’s government are not making significant progress. Given the number of near crisis-level issues the government is facing now, it is perhaps not surprising that these talks are not progressing.