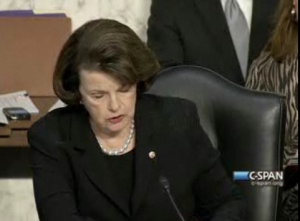 The takeaway the stenographers have gotten from yesterday’s intelligence threat assessment is that the Scary Iran Plot means Iran wants to target us in this country.

They reported that even as Dianne Feinstein made it clear James Clapper was bullshitting us on another front.

In her statement, she  noted that James Clapper’s assessment of our Afghanistan war is more optimistic than what the still-classified NIE says. (starting after 7:50)

I’m also concerned by what appears to the the disparity between the discussion of Afghanistan in Director Clapper’s statement for the record and the bleaker description in the December 2011 NIE. The Director’s statement notes modest improvements in the challenges that remain. While I’m unable to describe the NIE, as it remains a classified document, news reports of the NIE describe it as “sobering” and “dire” (those words in quotes, include phrases like, “mired in stalemate” (end quote). So I would like to ask the witnesses how they assess how stable Afghanistan will be in 2012 as well as in 2014 and beyond.

Here’s some of the public reporting on the NIE she’s talking about:

The U.S. intelligence community says in a secret new assessment that the war in Afghanistan is mired in stalemate, and warns that security gains from an increase in American troops have been undercut by pervasive corruption, incompetent governance and Taliban fighters operating from neighboring Pakistan, according to U.S. officials.

In a section looking at future scenarios, the NIE also asserts that the Afghan government in Kabul may not be able to survive as the U.S. steadily pulls out its troops and reduces military and civilian assistance.
“Its viability is tenuous,” said one official, citing the report.

Clapper’s statement, however, says the following:

In terms of security, we judge that the Afghan police and Army will continue to depend on ISAF support. ISAF partnering and mentoring have begun to show signs of sustainable progress at the tactical and ministerial levels; however, corruption as well as poor leadership and management will threaten Afghan National Security Forces’ (ANSF) operational effectiveness.

The Karzai government did achieve some success in 2011. The first phase of the process to transition security to Afghan leadership proceeded smoothly, and the second tranche of the transition is progressing as scheduled. The Karzai administration successfully convened a Loya Jirga in November to socialize the strategic partnership with the United States. Now that the fall 2010 electoral crisis is resolved, the Wolesi Jirga will likely regroup during the current winter recess and return its focus to limiting President Karzai’s authority, likely using the parliamentary approval process for ministerial appointees as a way to highlight the Parliament’s independence.

I find several things interesting about this: first, Clapper’s statement does admit that the ANSF isn’t ready to defend the country. The area where Clapper seems to most deviate from the reported details of the NIE is on Karzai’s government. Clapper would have us think it is improving, the NIE doesn’t agree.

But I’m also amused. After DiFi made it clear that Clapper’s statement had been spun, why did reporters (note, an exception is Josh Gerstein, who pointed out these comments as well) believe the other things he said, notably about Scary Iran?