Will SCOTUS Invent a “Database-and-Mining” Exception to the Fourth Amendment? 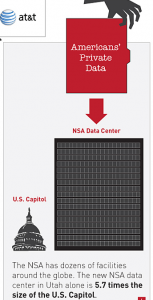 The notion that the government doesn’t have this US person data in a database is farcical at this point, as the graphic above showing the relative size of the NSA’s data center in UT–which I snipped from this larger ACLU graphic–makes clear (though the government’s unwillingness to be legally bound to segregate US person data made that clear, as well). As I suggested when this decision was released, the government must have been offering non-denial denials of having such a collection of US person data back in 2007.

Did the court ask only about a database consisting entirely of incidentally collected information? Did they ask whether the government keeps incidentally collected information in its existing databases (that is, it doesn’t have a database devoted solely to incidental data, but neither does it pull the incidental data out of its existing database)? Or, as bmaz reminds me below but that I originally omitted, is the government having one or more contractors maintain such a database? Or is the government, rather, using an expansive definition of targeting, suggesting that anyone who buys falafels from the same place that suspected terrorist does then, in turn, becomes targeted?

As I showed yesterday, the government is already doing something similar with this suit, simply ignoring the part of the suit pertaining to the completely legal retention of purely domestic communications, so long as it was ostensibly collected unintentionally.

Their larger argument, too, does something similar, using a definition of “targeting” that tautologically excludes US persons in principle but not in fact.

Of course, it takes two to communicate, so for every single targeted conversation, there is a counterparty whose communications are also collected. Nevertheless, the government focuses on authorizations–the word “targeting”–to distract from these counterparties. Note too, here, how once again the government ignores 1881a(b)(4), which permits the retention of incidentally collected domestic communications.

One of the real tells, though, comes in what appears to be a throwaway intended to prove there are people who would have standing to sue under FAA.

If the government intends to use or disclose any information obtained or derived from its acquisition of a person’s communications under Section 1881A in judicial or administrative proceedings against that person, it must provide advance notice of its intent to the tribunal and the person, even if the person was not targeted for surveillance under Section 1881A. 50 U.S.C. 1881e(a); see 50 U.S.C. 1801(k), 1806(c).

The government’s reference to the possibility it would use data “even if the person was not targeted for surveillance” admits that it does collect and review the communications of those not targeted, potentially even for law enforcement purposes. But then it suggests that the only way people could be aggrieved is if their communications were used for law enforcement, not intelligence.

That may not change SCOTUS’ analysis on standing. But it does make it clear that–no matter how the government would like to distract from this point–US person data (even entirely domestic conversations) can be legally collected and analyzed under this law.

So that is what the stakes are. The government would love to have SCOTUS either deny cert or affirm the district finding that the plaintiffs don’t have standing, particularly before Jewel, which addresses the underlying issue of dragnet collection. The government would also love to use such a SCOTUS action, in secret, to rule that its use of GPS tracking in the intelligence, which it is busy distinguishing from a law enforcement context under Jones, context is legal. The government would also like any challenge to pertain to a specific order (as it would be under 1881e), so it can hide what it does with the data it collects once it goes into the database in UT.

And given what Russ Feingold said back in 2008–that an adversary process would reveal both the potential for abuse, and quite possibly the abuse, the government really really doesn’t want this case to move forward.