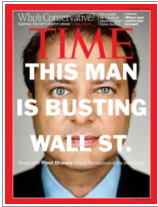 The Time Cover–facetiously suggesting that SDNY US Attorney Preet Bharara was busting anyone of note–was bad enough.

But this piece from noted Wall Street booster, Charlie Gasparino, reads more like a reminder to his readers of the protection they might lose if Bharara decided to check out and cash in.

Preet Bharara, the US Attorney for the Southern District, is telling friends that if he should leave his job today, he could earn as much as $6 million in the private sector, according to people with direct knowledge of these conversations. Bharara’s private statements come as speculation grows in Washington that the politically savvy prosecutor might also replace his boss, US Attorney General Eric Holder, if President Obama wins re-election.

That said, private law firms seek out prosecutors of Bharara’s level primarily because of the high-profile clients they can attract.

An especially nice touch is the vote of approval from Harvey Pitt, whose enabling of financial corruption set new standards even from the Wall Street-coddling SEC.

“I have no doubt he would be a star in the private sector,” said former SEC chairman Harvey Pitt, who also worked as a high-profile private-sector attorney. “Bharara deserves enormous credit for the insider-trading effort, the cases his office has brought, and what his office is accomplishing. I just think it would be better if other people said that.”

When Harvey Pitt hails what your office is accomplishing, it usually means Wall Street crooks are getting a legal pass.

And now we know the price Bharara expects when he cashes out: $6 million.

tweets from our circle
bmaz@bmazAnd because of this demented Elon nonsense ranting, "HillaryForPrison" is trending. This is the Twitter Musk desire… twitter.com/i/web/status/1…20 minutes ago21 May 2022
emptywheel@emptywheelRT @nytimes: Haiti is the only country in the world where descendants of enslaved people were forced to pay reparations to descendants of t…25 minutes ago21 May 2022
Ed Walker 🍞🌹💉💉@MasaccioEWRT @RepKatiePorter: 🥩 4 companies control 85% of the beef market 🫘 4 companies control 80% of the soy market 🍝 3 companies control 78% of t…4 hours ago21 May 2022
Ed Walker 🍞🌹💉💉@MasaccioEWRT @sarahkendzior: A thread from a year ago5 hours ago21 May 2022
Ed Walker 🍞🌹💉💉@MasaccioEWRT @Anne_Hidalgo: Un samedi qui commence bien dans le 5e. Avec @MarineRosset et @MCLemardeley, rencontre avec les commerçants du marché Por…5 hours ago21 May 2022
Ed Walker 🍞🌹💉💉@MasaccioEWRT @ThePlumLineGS: "Make a big deal of this. What do you think Republicans would be doing if the situation was reversed?" Yep. This is goo…5 hours ago21 May 2022
RayneToday@raynetodayRT @darth: i know this is completely unrelated but imagine spending nine fuckin hours with that guy15 hours ago21 May 2022
Jim White@JimWhiteGNVWho’s ready for baseball at the end of the rainbow? pic.twitter.com/QWJZZK5LpC17 hours ago20 May 2022
Jim White@JimWhiteGNVMore than fifty folks from the church are signed up to eat pulled pork in my back yard tomorrow evening. Fortunatel… twitter.com/i/web/status/1…19 hours ago20 May 2022
Jim White@JimWhiteGNVSays the man who just disenfranchised many voters of color. Just fuck off with your hypocrisy. twitter.com/GovRonDeSantis…24 hours ago20 May 2022
RayneToday@raynetodayRT @wyatt_privilege: Not a mind blowing observation but the game now is to send crazy shit upstairs to scotus and invite them to remold, sc…2 days ago19 May 2022
RayneToday@raynetoday~ding-ding-ding~ Accurate. twitter.com/robinmarty/sta…3 days ago18 May 2022
Our Detention Authority Branches Out beyond Al Qaeda If Radical Muslims Aren’t Found at Kosher Delis, Then Why Did NYPD Look...
Scroll to top