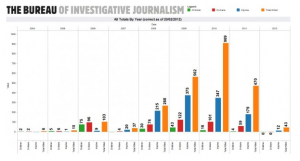 There’s something funny about the response I’ve seen so far to the AP report on the number of civilian drone strikes.

The AP reports that 30% of the drone strikes in the last 18 months in North Waziristan were civilians or police; discounting the most deadly attack brings that number down to 12% (eliminating the March 17 strike makes the final totals 18 civilians killed of 152).

Indeed, the AP was told by the villagers that of at least 194 people killed in the attacks, about 70 percent — at least 138 — were militants. The remaining 56 were either civilians or tribal police, and 38 of them were killed in a single attack on March 17, 2011.

Excluding that strike, which inflicted one of the worst civilian death tolls since the drone program started in Pakistan, nearly 90 percent of the people killed were militants, villagers said.

Though I’m not sure why any analysis would discount that one strike. While the government offered the AP a lame excuse about heavily armed men,

Regarding the March 17, 2011, strike on Shiga village, the bloodiest attack investigated by the AP, U.S. officials familiar with drone operations said the group targeted was heavily armed, some of its members were connected to al-Qaida, and all “acted in a manner consistent with AQ (al-Qaida)-linked militants.”

But villagers and Pakistani officials said the missiles hit a community meeting, or jirga, held to resolve a mining dispute, killing four Pakistani Taliban fighters and 38 civilians and tribal police.

An earlier AP story–to which this same writer, Sebastian Abbot contributed–described how the US Ambassador to Pakistan tried to stop the strike at the last minute.

Ambassador Cameron Munter’s rare request — disclosed to The Associated Press by several U.S. officials — was forwarded to the head of the CIA, who dismissed it. Some U.S. officials said Leon Panetta’s decision was driven by a belief that the militants being targeted were too important to pass up, but others suspected that anger at Pakistan for imprisoning Raymond Davis for so long played a role.

Furthermore, the CIA changed their targeting rules in response to this one strike, suggesting the government recognized a problem with it.

And in any case, the range of civilian casualties remains 12-30%.

Compare that to the numbers The Bureau of Investigative Journalism shows (above) for 2011: 59 civilians killed out of 470 total, or 13% civilians (their numbers include the March 17 strike), and the AP’s numbers actually reflect higher levels of civilian casualties than TBIJ (they’re using a different time frame and focusing on attacks in North Waziristan).

In any case, that would seem to corroborate TBIJ’s work, which is particularly troubling given their recent report that the US has targeted rescuers and funeral-goers.

Will a cowardly counterterrorism official now suggest the AP sympathizes with al Qaeda for bringing transparency to their covert war? (Oh wait–the NYPost already impugned the AP’s motives for its NYPD expose.)

Nevertheless, I’ve seen a bunch of people on Twitter suggest the AP’s report refutes earlier claims of drone casualties made to US readers. To do so involves sloppy reading, at best. What the report actually says is that these numbers are lower than Pakistan’s public–not America’s–have been led to believe.

American drone strikes inside Pakistan are killing far fewer civilians than many in the country are led to believe, according to a rare on-the-ground investigation by The Associated Press of 10 of the deadliest attacks in the past 18 months.

The widespread perception in Pakistan that civilians, not militants, are the principal victims — a view that is fostered by leading right-wing politicians, clerics and the fighters themselves — fuels pervasive anti-American sentiment and, some argue, has swelled the ranks of al-Qaida and the Taliban. [my emphasis]

What this story is basically doing is calling out Pakistani right-wingers on the misperceptions they’re sowing for political gain.

Imran Khan, a popular opposition politician close to some right-wing Islamic groups, addressed a cheering crowd last April and said: “Those who lie to the nation after every drone attack and say terrorists were killed should be ashamed.”

Imagine that! Calling out politicians for hyping a threat! No wonder Americans have difficulty recognizing that genre of reporting!

And of course–though the headline and lead distract from this–the AP also proves that independent reporting from on the ground shows the claims from anonymous counterterrorism officials that there have been no civilian casualties to be lies.