If the Drug Czar Does Not Supervise the Money It Doles Out, Who Does? 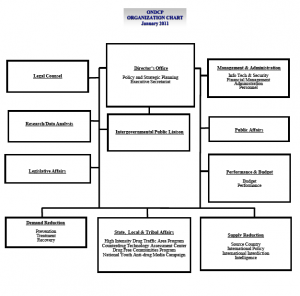 At the Daily Press Briefing today, Jay Carney was asked whether the White House approves of the NYPD spying on New York and New Jersey’s Muslim communities.

He responded by claiming that the Office of National Drug Control Policy–the Drug Czar!–has no authority over the money.

The Office of National Drug Control Policy is a policy office that has no authority–no authority to and does not conduct, direct, manage, or supervise any law enforcement operations. The funding is provided to the H-I-D-T-A, HIDTA program, of New York and New Jersey, which then provides it to law enforcement agencies to assist in the procurement of resources like computers and other items.

This is not an Administration program or a White House program. This is a program of the NY Police Department.

Now, there’s reason to believe the response was bullshit. As the Drug Czar org chart above shows–and Deputy Drug Czar Benjamin Tucker’s biography makes clear–HIDTA is solidly in the chain of command in the Drug Czar’s office.

With 40 years of experience in the fields of law enforcement and criminal justice, Mr. Tucker is a recognized expert in community policing.

Furthermore, the Director of HIDTA, Dr. Ellen Scrivner, has her office in the Executive Office of the President.

Drug Czar Gil Kerlikowske “coordinates all aspects of Federal drug control programs” and one of those programs is HIDTA, which apparently funds spying on Muslims. And the Drug Czar’s Policy Coordination Circular–which was updated on August 3, 2011–requires that the Drug Czar review any chances to “drug policy.”

Pursuant to 21 U.S.C. §1704(b), agencies are required, except under exigent circumstances, to notify ONCDP of any proposed change in policies relating to their activities under the National Drug Control Program prior to implementation of such change.

The Director of ONCDP reviews such proposed changes and certifies in writing whetehr such change is consistent with the National Drug Control Strategy.

In other words, Obama’s Deputy Drug Czar oversees this program, its Director works in EOP, and any changes on anything pertaining to drug policy must be approved by the Drug Czar.

That kind of micro-management inside the White House is the whole point of having a Czar rather than a congressionally-supervised agency head.

But let’s take Jay Carney’s response in good faith for the moment. After all, the website does say that there’s some local (and some Federal) oversight at the local level.

At the local level, the HIDTAs are directed and guided by Executive Boards composed of an equal number of regional Federal and non-Federal (state, local, and tribal) law enforcement leaders.

In FY2010, $16 million was doled out under HIDTA. Yet according to Carney, the people doling out that money do not “conduct, direct, manage, or supervise” the grants. Poof! The Drug Czar is helpless to do anything about that money once it moves out of EOP.

One more point. Where Carney says this money goes to computers (which is what the AP said, in part)? The Drug Czar website says that HIDTA does the following:

That is, there sure appears to be a significant intelligence component to this purportedly oversight-free doling of funds.

Frankly, there’s no right answer here. Jay Carney would like us to believe the White House Drug Czar, a position enacted precisely to concentrate oversight and control in the White House, operates programs over which it exercises no oversight.

The alternative is that the White House (though perhaps the Bush White House) approved and funded some of the CIA-on-the-Hudson.