The Special Agent in Charge of the Newark FBI, Michael Ward, laid into the NYPD’s CIA-on-the-Hudson program for its spying on New Jersey’s Muslims. He raised several legitimate gripes: that the NYPD was picking and choosing the information it shared, that the NYPD wasn’t focused on centers of terrorism, that it has created distrust between the Muslim community and law enforcement.

But there is one complaint that Ward should direct closer to home: that law enforcement officers have a specific articulable basis for mapping out the location of ethnicities. (Ward’s comments in this start after 7:00–note what he says on video is slightly different from what he appears to have said later to the NJ Star-Ledger journalist.)

[The public needs to know] you’re following leads that are warranted and that you’re not out chasing anything but you have a–there’s a specific law enforcement reason behind what you’re doing, and that you use the least intrusive means possible, when available.

It’s also important that [the public] know that Joint Terrorism Task Force, the FBI, and law enforcement in New Jersey in general, that we take the guidelines which we’re supposed to follow very very seriously.

Mind you, I think there should be an articulable basis to map out locations of specific ethnicities.

But just as the NYPD doesn’t agree, neither does the FBI. In fact, as the ACLU’s FOIA is showing, the FBI is doing precisely the same kind of demographic mapping around the country as the NYPD is doing in NYC with their Domain Assessment program.

While the office is dawdling over releasing the unredacted copies, here’s the plan the FBI put into place for mapping out Muslims in Detroit, just as the NYPD did in NYC.

There are more than forty groups designated as terrorist organizations by the US State Department. Many of these groups originate in the Middle-East and Southeast Asia. Many of these groups also use an extreme and violent interpretation of the Muslim faith as justification for their activities. Because Michigan has large Middle-Eastern and Muslim population, it is prime territory for attempted radicalization and recruitment by these terrorist groups. Additionally, Sunni terrorist groups always pose a threat of attack on U.S. soil since it is the stated purpose of many of these groups. The Detroit Division Domain Team seeks to open a Type IV Domain Assessment for the purpose of collecting information and evaluating the threat posed by international terrorist groups conducting recruitment, radicalization, fund-raising, or even violent terrorist acts within the state of Michigan.

And here’s how Ward’s own office used census data to map out the Latino population in New Jersey as part of their efforts to fight the MS-13 gang (this was done in 2008, before Ward got appointed to Newark, but while Chris Christie was still US Attorney). 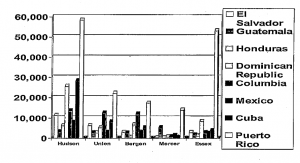 The Domain Assessment of NJ’s Latino population includes 4 maps which appear to be just like the ones the NYPD did of Muslim populations, though they are entirely redacted.

But if Newark’s Muslims are suspicious because people are conducting widescale mapping of communities, they have reason to be as suspicious of the FBI as the NYPD, because both are doing these baseless demographic mappings based on ethnicity and  religion.

Update: “Surveil” taken out because it is not technically correct in FBI context.