Is This What Robert Mueller Meant by Cyber Expertise?

Back on February 3, I noted what I thought was the irony that, four days after FBI Director Robert Mueller bragged about FBI’s cybersecurity expertise–including its partnerships with counterparts overseas–Anonymous released an earlier hacked call between Scotland Yard and FBI.

Mueller: If I may interject, we have built up a substantial bit of expertise in this arena over a period of time, not only domestically but internationally. We have agents that are positioned overseas to work closely with–embedded with–our counterparts in a number of countries, and so we have, over a period of time, built up an expertise. That is not to say that NSA doesn’t have a substantial bit of expertise also, understanding where it’s located.

Mikulski: But it’s a different kind.

We now know that at the time of both the hack and Mueller’s comment, the FBI was running Hector Xavier Monsegur–Sabu–as a confidential informant–and the Scotland Yard call is one of the hacks they busted others for with his assistance last week.

In January 2012, O’CEARRBHAIL hacked into the personal e-mail account of an officer with Ireland’s national police service, the An Garda Siochana (the “Garda”). Because the Garda officer had forwarded work e-mails to a personal account, O’CEARRBHAIL learned information about how to access a conference call that the Garda, the FBI, and other law enforcement agencies were planning to hold on January 17, 2012 regarding international investigations of Anonymous and other hacking groups. O’CEARRBHAIL then accessed and secretly recorded the January 17 international law enforcement conference call, and then disseminated the illegally-obtained recording to others.

And meanwhile, all of the things Sabu was saying on his twitter account were closely monitored–if not written–by the FBI, including the comment about FBI’s informants, above, and the multiple “celebrations” of the Scotland Yard hack. 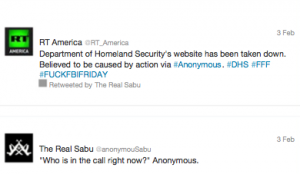 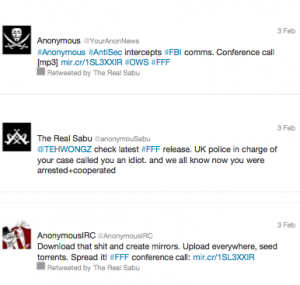 I suppose we’ll learn more about what Mueller really meant by his “embedded” comment to Barbara Mikulski.

But it appears that when Muller bragged of FBI’s expertise he meant that they had found a way to bust people for hacking themselves and then publicizing those hacks so they amount to interesting crimes.