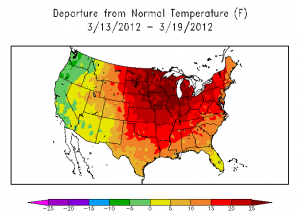 This is not really my beat, but after spending the weekend in an unseasonably warm DC and returning to even warmer temperatures here in MI, I felt it deserves a post.

In DC all weekend, people were enjoying the gorgeous cherry blossoms, but bemoaning the fact that the peak bloom pretty much has preceded the Cherry Blossom Festival. Now in Holland, MI, they’re facing the likelihood that not even moving up its Tulip Fest will ensure there are still blooms on the stems come May.

It is 85 degrees here at the moment (though there’s a pleasant breeze coming off the river), and predicted to climb higher. Tomorrow it is predicted to break 90. Nine. Zero. In March. In MI.

(If posts are thin tomorrow, you can presume McCaffrey the MilleniaLab and I have gone to the beach.)

As the map above makes clear, temperatures this week are 25 degrees above where they’re supposed to be this time of year.

And while I realize Mr. Pricky Cactus will show up and boast about how hot and dry it is in AZ, things are just so far outside of the norm here it’s creepy (though pleasant). Wunderblogs notes that some of the the “coldest places” in the nation are setting repeated record highs.

Summer in March continues for the Midwest
The ongoing March heat wave in the Midwest will continue to set all-time heat records through Thursday, gradually shifting its peak intensity eastwards during the week. A few highlights from yesterday’s records:

Pellston, Michigan in the Northern Lower Peninsula is called “Michigan’s Icebox”, since it frequently records the coldest temperatures in the state, and in the entire nation. But the past three days, Pellston has topped out at 80° – 82°F, the first 80°F March days in their history. Yesterday’s 82° reading broke the previous record for the date (56° in 1976) by an amazing 26°, and was 44°F above average. Nearby Traverse City hit 83°F yesterday, the third consecutive day the city has experienced its hottest March temperature on record.

And MoJo’s Julia Whitty had more here earlier in the week.

I’m loving having summer on the first day of spring and all, but at some point we need to get serious about climate change.