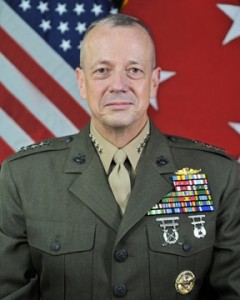 But he added that the fact these relationships exist are not of particular surprise. “We shouldn’t be surprised that they have a relationship, I would not speculate on what specific operational support they have or whether they are an actual arm. I would just say that the relationship potentially is unhelpful.”

No, General Allen “would not speculate” on “whether” the Haqqani “are an actual arm” of ISI, but he’ll sure put it out there for us to consider again, and at a very sensitive time in negotiations.

As for the Obama-Gilani meeting, it appears to have been brief and symbolic rather than substantive. From Obama:

“There have been times – I think we should be candid – over the last several months where those relations have had periods of strains,” Obama told reporters as the meeting opened.

“But I welcome the fact that the parliament of Pakistan is reviewing, after some extensive study, the nature of this relationship.

Gilani said: “We are committed to fighting against extremism. We want stability in Afghanistan and Pakistan.

“We want to work together with you,” he told Obama.

It seems likely that Pakistan will impose a tax on US war supplies being transported through their country to Afghanistan in order to re-open the supply lines. A bigger sticking point, though, remains the issue of drone strikes. Pakistan views them as an imposition on their sovereignity, but the US is determined not to stop them or even to provide Pakistan with advance warning of targets or locations. Allen’s reprise of Mullen’s accusation will only make the drone issue negotiation harder, so look for yet another delay in any agreement being announced.