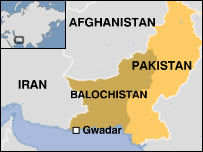 That’s tremendous strategy from Gohmert. A look at the map above reveals that once Balochistan is “free” (and following the desires of Rohrabacher, Gohmert and King in all their actions, one presumes), there is just no way that supplies from Pakistan could get to Taliban forces in Pakistan or Afghanistan. And then Gohmert tops his geography failure by falling back on the tremendous logic that we and the Baloch must be friends because (once the US comes around to his thinking) we share the common enemy of Pakistan. That worked so well with bin Laden, didn’t it?

Rohrabacher also continued to repeat another mistake. During his initial hearing on Balochistan, he was chided in the Pakistani press for mispronouncing Balochistan. He has not yet moved to proper pronunciation of Baloch, either:

Rep. Rohrabacher, who mispronounced Baloch as Bal-ook for the entirety of the press conference, dispelled allegations that he was being paid by a lobby or an individual for raising the cause of the Baloch people.

At least one of Rohrabacher’s defenders on Twitter who claims to be from the region, however, offered yesterday that “Balook” is the proper English pronunciation.

Dawn puts the press conference into the wider picture of the current state of US-Pakistan relations:

Repeating their anti-Pakistan mantra, two senior US Congressmen pledged to continue to press for Balochistan’s secession even if Islamabad changed its alleged anti-US policies.

Congressmen Dana Rohrabacher and Louie Gohmert, however, told a news briefing in Washington that they did not have the power to provide weapons to Baloch fighters as they were not in the government.

The lawmakers focused their anger on an issue that resonates with the American public — Osama bin Laden’s discovery in Abbottabad. The briefing was held the same day as President Barack Obama and Prime Minister Yousuf Raza Gilani met in Seoul to help rebuild US-Pakistan ties after almost two years of deterioration.

Both congressmen said that they would oppose any reconciliation with Pakistan.

What I find most frustrating about the theatrics of Rohrabacher and his friends here is that the people of Balochistan are indeed suffering greatly at the hands of Pakistan’s government. With their homeland split among Pakistan, Iran and Afghanistan, the Baloch face truly difficult conditions wherever they turn. Rohrabacher’s heavy approach, relying on heated rhetoric and advocating the overthrow of a government that is flirting with finally making progress toward a functioning democracy seems to me to be more likely to increase rather than decrease the suffering of the people in the region he professes to be helping. Does Rohrabacher want to help the Baloch, or does he merely want US control of the port of Gwadar and an end to the planned gas pipeline from Iran to Pakistan through Balochistan?