If “Anarchists” Threaten to Blow Up a Little-Used Bridge Over Federal Property, Is It a Plot? 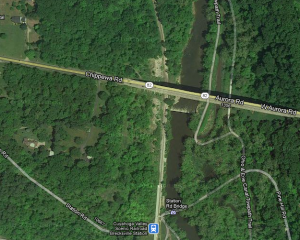 The bridge on 82 in this picture is the bridge a bunch of purported “anarchists” have just been arrested for threatening to blow up.

You’ll note the idyllic parklands through which it travels You’ll note the presence of two bridges in the immediate vicinity (not to mention the major freeway bridges not far away), to which traffic could easily be diverted if an attack succeeded. You’ll notice the almost complete lack of traffic on the bridge, at least when Google took its satellite picture.

In short, it makes zero sense for anyone to want to target the bridge. It would have almost no visibility. It would do almost nothing to disrupt traffic.

It would be, at best, an expensive curiosity.

It makes a far more implausible target for terrorists than the one the alleged plotters originally considered: bank signs in downtown Cleveland. The signs would have visibility. They would strike at a logical anarchist target. It would create news.

As one of the plotters said, “The signs are the most important part because they need to make sure everyone knows the action was against corporate America and the financial system, not just some random acts.”

The bridge, on the other hand, has just two advantages. First, as the affidavit notes, the bridge “has support columns within the boundaries of the National Park” and also (being not that far from the PA border) occasionally has cars with out of state plates drive over it. Those things–in spite of this being a little-used bridge on a state road–make blowing the bridge up interstate commerce, something the FBI can pursue.

And, the bridge, unlike some signs, would require an explosive like C4 to bring down.

So well before you get to the parts where a paid informant was offering to find money to get the C4 that the plotters said would otherwise be too expensive, you really have to wonder what purpose this plot serves.

Besides to give the FBI something to point to on May Day to justify arresting peaceful protestors.