After Obama Slips into Afghanistan Under Cover of Darkness, Taliban Attack at Dawn 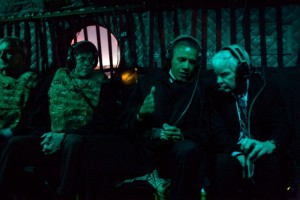 Despite ongoing claims from the military that “progress” is being made in Afghanistan (but see this post for a direct contradiction to the claim violence fell 9% in 2011), the reality of the fragile security situation in Afghanistan dictated that President Obama’s trip to Afghanistan to sign the Strategic Partnership Agreement (which commits to exactly nothing) had to be unannounced and under cover of darkness. Obama and Afghanistan’s President Hamid Karzai signed the agreement around midnight in Karzai’s palace and then Obama left after a short visit with US troops at Bagram.

Just hours after Obama left before dawn on Wedesday morning, the Taliban attacked the Green Village around 6 am local time, killing at least seven people. This compound houses many foreign workers. Although the Taliban are claiming the attack was a direct response to Obama’s visit, it also seems likely the attack had been planned before the visit was known since it occurred on the one year anniversary of the killing of Osama bin Laden in Pakistan (which Obama could not visit now, even under cover of darkness, and especially on the anniversary of bin Laden’s death).

The readiness and capabilities of Afghan security forces lie at the center of both the Strategic Partnership Agreement and the Taliban’s attack Wednesday morning. At the same time that Obama and Karzai signed their agreement that rests on Afghanistan taking the lead for security as the US exits, the Taliban attacked one of the primary housing compounds for foreign workers in the nation’s capital, just two weeks after another brazen attack in Kabul. If Afghan security forces are seen as unable to prevent attacks on foreigners in the capital, then there could be serious fallout for groups that would be anticipated to be necessary for the “rebuilding” phase once US troops are gone.

Groups trying to asses just how bad the attack was this morning will find confusing information. This report by AP claims the attackers made it inside the walls of the protected area:

The violence began around 6 a.m. in eastern Kabul with a series of explosions and gunfire ringing out from the privately guarded compound known as Green Village that houses hundreds of international contractors.

Shooting and blasts shook the city for hours as militants who had stormed into the compound held out against security forces, according to an official who spoke on condition of anonymity because he was not authorized to release the information.

The Green Village complex, with its towering blast walls and heavily armed security force, is very similar in appearance to NATO bases in the city. An Associated Press reporter at the scene saw a group of Afghan soldiers enter the Green Village compound, after which heavy shooting could be heard coming from inside.

In contrast, this report from Reuters states that the attackers did not make it inside the compound:

Hundreds of police and intelligence agency troops surrounded the area around Green Village after the attack. Ruined cars were seen in front of the compound gates but officials said no attackers made it inside the heavily guarded complex.

The Taliban’s Mujahid maintained fighters had made it inside the compound and inflicted “very heavy casualties”. The Islamist group often exaggerates accounts of attacks involving foreign troops or Afghan government targets.

A spokesman for the NATO-led coalition force said the attack had been put down. Western witnesses inside the compound said Afghan commandos killed the attackers, with direction from Norwegian special forces.

If aid groups feel that they are not safe inside the Green Village even before US forces leave Afghanistan, it is very hard to see how they will want to be present once only Afghan forces are in charge of security. An outflow of aid groups would appear to be yet another potential route for Obama’s Afghanistan plan to be in ruins just in time for the November election.