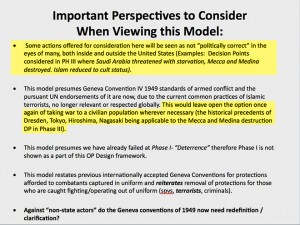 I had meant to link to and comment on the Danger Room piece on the group of officers teaching “total war” against Islam at the Joint Staff War College.

For the better part of the last decade, a small cabal of self-anointed counterterrorism experts has been working its way through the U.S. military, intelligence and law enforcement communities, trying to convince whoever it could that America’s real terrorist enemy wasn’t al-Qaida — but the Islamic faith itself. In his course, Dooley brought in these anti-Muslim demagogues as guest lecturers. And he took their argument to its final, ugly conclusion.

“We have now come to understand that there is no such thing as ‘moderate Islam,’” Dooley noted in a July 2011 presentation (.pdf), which concluded with a suggested manifesto to America’s enemies. “It is therefore time for the United States to make our true intentions clear. This barbaric ideology will no longer be tolerated. Islam must change or we will facilitate its self-destruction.”

If I had, though, I would have said largely what Human Rights First wrote in a letter to General Martin Dempsey emphasizing that the disdain for the Geneva Convention must get as much attention as the Islamophobia exhibited in the training materials.

Publicity surrounding this incident has rightly centered on the discriminatory nature of the materials. But we are equally distressed by an aspect that has received less attention: the cavalier and ignorant dismissal of the principles and rules of distinction and proportionality reflected in the Geneva Conventions and their Additional Protocols. In a nation committed to equality under the rule of law, this aspect of the materials is as disturbing as their anti-Islamic nature. Military personnel are supposed to be well trained in the applicability of the law of armed conflict, even if the military cannot train away their personal prejudices. The military must also reinforce the point that law trumps any personal religious beliefs of members of the military.

President Bush made clear his understanding that the United States was not at war with Islam, but rather with violent extremists. Unfortunately, we are still living with the toxic legacy of his determination that the Geneva Conventions are an irrelevant nuisance.

And until HRF sent this letter, I really hadn’t seen anyone talking about how problematic it was that the military was still teaching that Bush’s rules remained in effect.