Armed US Diplomats Detained at Peshawar Toll Booth: What Was Mission? 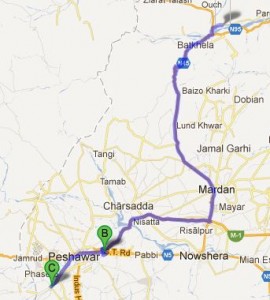 If we assume that the University is just a cover location, then what was the real purpose of the trip? Two possibilities come to mind in light of recent events. The trial and imprisonment of Dr. Shakeel Afridi has upset many in the US, and so it is possible that this was indeed a diplomatic trip and that it was aimed at securing the release of Afridi. The problem with that explanation, though, is that Afridi’s trial was carried out in Bara, which is on the western outskirts of Peshawar, rather than the easern side where the diplomats were detained. Further, it appears that Afridi is now jailed in Peshawar’s central jail, so it would not be necessary to leave Peshawar to visit with Afridi or his local jailers.

The second possibility for the diplomats’ trip relates to today’s news that yesterday’s drone attack in North Waziristan may have taken out al Qaeda’s number two in command. From AP’s article on this development:

The State Department’s Rewards for Justice program had set a $1 million reward for information leading to al-Libi, who had filmed numerous propaganda videos urging attacks on U.S. targets after he escaped a prison at Bagram Air Base in Afghanistan in 2005.

The significance here is that this is described as a State Department program and the diplomats who were detained presumably work for the State Department.  Of course, anyone traveling through Pakistan’s tribal areas with a million dollars in cash would be well-advised to travel in “bullet-proof vehicles” and to be heavily armed. Arguments against this explanation are that at least on the official news front, it is not yet clear whether al-Libi was indeed killed and that North Waziristan is considerably to the west and south of Peshawar, instead of north and east where Malakand University is located.

At any rate, since shooting did not break out this time, we are likely not to hear more about this event and whether these were indeed State Department employees or CIA agents working to gather intelligence such as locations of high value targets for drone strikes.

As a final parting note, it seems worth pointing out that the AP article cited above trotted out Bruce Riedel to claim that the possibility of having killed al-Libi somehow justifies the entire drone program:

Al-Libi’s death would be “another reason not to accept Pakistan’s demand for an end to drone wars,” added Brookings Institute’s Bruce Riedel, a former CIA officer and adviser to the White House on Afghanistan and Pakistan policy.

That is quite a contrast with these words from Pakistan’s Foreign Minister Hina Rabbani Khar in an interview with Foreign Policy:

In the wake of a New York Times article laying out how Obama personally guided the drone war on Pakistani soil, Khar criticized the use of drones as counterproductive. “If you are creating 10 more targets for every target you take, are you doing a service or a disservice to your eventual goal of winning the war?” she asked.

Update: From a comment by Marcia Anglerill: I am the Public Affairs Officer at US Consulate General in Peshawar and I can tell you exactly what the “mission” was. It was to organize an inauguration ceremony for an English language program at Malakand University. This program gives scholarships to economically underprivileged students to participate in a 2-year intensive after school program to improve their English skills, thereby giving them a better chance to pursue higher education and secure a better job in the future. The Americans who traveled to Malakand went there as part of a security advance, as is standard procedure. They had the proper documents and permission from the Pakistan Ministry of Affairs to travel there, despite what the local media is reporting and now blogs such as yours.