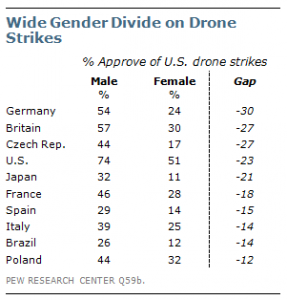 Pew Research has started polling whether people around the world approve of America’s use of drones against terror leaders.

Do you approve or disapprove of the United States
conducting missile strikes from pilotless aircraft called
drones to target extremists in countries such as Pakistan,
Yemen and Somalia?

The quick answer is, no one aside from Americans themselves (who love them) likes our use of drones. Only in the UK and Poland does the result come close to 50/50. Mind you, none of the countries where we’re using drones were asked in this questionnaire (Pew promises numbers from Pakistan soon). India, which is in the neighborhood and fights some of the same terrorist groups being hit, split 32 approving, 21 disapproving, and the rest not answering.

But I’m even more interested in the gender split. As shown above, the gender gap in drone approval levels is in the same neighborhood as Mitt Romney’s gender gap.

They make Americans feel powerful, and I guess that’s worth 34 net approval points.

Update: It turns out Americans aren’t all that fond of drones themselves, for uses where they might be surveilled.