Selective Prosecution from CIA’s US Attorney

In its response to John Kiriakou’s claim he is being selectively prosecuted, the government cites this passage from US v. Armstrong.

A selective prosecution claim asks a court to exercise judicial power over a special province of the Executive. The Attorney General and United States Attorneys retain broad discretion to enforce the Nation’s criminal laws . . . . As a result, [t]he presumption of regularity supports their prosecutorial decisions and, in the absence of clear evidence to the contrary, courts presume that they have properly discharged their official duties. In the ordinary case, so long as the prosecutor has probable cause to believe that the accused committed an offense defined by statute, the decision whether or not to prosecute, and what charge to file or bring before a grand jury, generally rests entirely in his discretion. [my emphasis]

It then describes the standard for presumption of regularity by citing David Passaro’s unsuccessful appeal.

Kiriakou seeks to overturn the presumption of regularity by asserting that the decision to charge him must have arisen from some illegitimate prosecutorial motive, rather than the investigation having followed the facts where they led. However, the defendant fails to offer clear evidence to support his claim, and falls far short of satisfying the high burden required to overcome the presumption of regularity. See United States v. Passero, 577 F.3d 207, 219 (4th Cir. 2009) (“[u]nless a defendant provides ‘clear evidence’ to overcome the presumption that a government prosecutor has acted lawfully and without discrimination-a ‘particularly demanding’ standard-he cannot demonstrate a constitutional violation for selective prosecution.” (citation omitted)). [original spelling error for “Passaro” highlighted]

The entire filing is signed this way: 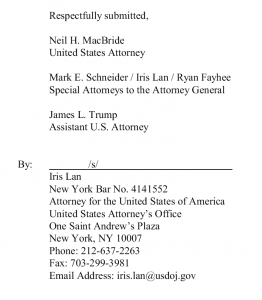 Compare that signature with this one, from before Kiriakou was indicted.

Or this signature, from the indictment itself.

Monday’s response to Kiriakou’s selective prosecution motion is the first submitted after Patrick Fitzgerald’s last day on Friday. If I’m not mistaken, it is the first filing submitted after the guy selected for his independence from the CIA’s witch hunt on torture departed government. It is, AFAIK, the first public hint at what the new investigative reporting structure and team looks like (which appears to have completely changed, even beyond Fitzgerald’s departure).

Which brings me to the problem with the government’s citations on selective prosecution.

For better or worse, it would be difficult for John Kiriakou to prove that Patrick Fitzgerald, the guy who once indicted the Vice President’s Chief of Staff for obstruction into an investigation into whether he leaked a CIA officer’s covert identity, selectively prosecuted him for leaking a CIA officer’s covert identity. After all, Fitzgerald was willing to go after one of the most senior national security officials in the country for precisely this alleged crime; going after Kiriakou (and indicting him for the lies told over the course of that investigation) would be consistent with that history.

But to prove that the US Attorney for Eastern District of VA is not entitled to the presumption of regularity on a prosecution involving our nation’s torturers? Kiriakou need only point to the USA EDVA’s (then held by Paul McNulty) decision not to prosecute the Salt Pit murder–by some of Covert Officer A and Deuce Martinez’ colleagues–of Gul Rahman to show that the USA Attorney for EDVA in fact should not be entitled to the presumption of regularity. On the contrary, EDVA has already affirmatively covered up the torture crimes of the CIA.

And Kiriakou’s job is made easier still with the reference to David Passaro’s appeal. Passaro was the only CIA person (he was a contractor training Afghan paramilitaries) to be prosecuted in relation to abusive interrogation. But he would never have been prosecuted if it weren’t for the government’s blatant failure to provide him with discovery of a bunch of documents that would have shown the techniques he used on Ahmed Wali were approved by the CIA Director, acting pursuant to the President’s authorization. In other words, Passaro’s entire prosecution was built around prosecutorial abuse that served to hide that they were prosecuting the wrong guy–the guy who followed orders allowing abuse rather than the high level officials who authorized that abuse.

And I’m sure, under the watchful eyes of the CIA’s own US Attorney, this case will continue along those same lines, with prosecutorial abuse designed to hide the long-term criminal cover-up of the CIA’s torture.

tweets from our circle
bmaz ( @[email protected] )@bmazRT @BitterSouth: Our favorite video from Mardi Gras thus far. The debut of Krewe da Bhan Gras, the first ever Mardi Gras krewe of its kind.…5 hours ago06 February 2023
bmaz ( @[email protected] )@bmazRT @chrissgardner: Standing ovation for surprise #Grammys presenter Dr. Jill Biden, the First Lady of the United States https://t.co/nhh9pV…6 hours ago06 February 2023
emptywheel@emptywheelRT @JuddLegum: FACT: No individual has done more to elect officials who are unfailingly loyal to Trump than CHARLES KOCH. The top corporat…10 hours ago06 February 2023
Ed Walker 🍞🌹💉💉@MasaccioEWRT @RobertMaguire_: Rep. Andrew Clyde (R-Ga.), who has been passing out assault rifle lapel pins to his colleagues this week, cowers in ter…16 hours ago05 February 2023
Ed Walker 🍞🌹💉💉@MasaccioEWAny evidence universities in sane states are trying to poach the top scholars from Florida? Or K-12 school district… twitter.com/i/web/status/1…16 hours ago05 February 2023
emptywheel@emptywheelRT @ryanjreilly: Jan. 6 defendant Gabe Chase is set to take a misdemeanor plea tomorrow. An online sleuth flagged to me that he appears to…16 hours ago05 February 2023
Ed Walker 🍞🌹💉💉@MasaccioEWRT @sotsogm: I'm aware that China flew spy balloons over the US during the Trump administration, but also if they didn't it had more to do…17 hours ago05 February 2023
emptywheel@emptywheelRT @MarkHamill: "Great shot, kid... that was one in a million!"19 hours ago05 February 2023
Jim White@JimWhiteGNVRT @bmaz: @JimWhiteGNV @ptoemmes @laRosalind This is important. The last time I heard about a Komodo, it bit Sharon Stone's husband. http…3 days ago03 February 2023
Jim White@JimWhiteGNVThe Kamado has left the building! @ptoemmes @bmaz @laRosalind pic.twitter.com/Zl84eb9xq13 days ago03 February 2023
NATO Supply Shipments Through Pakistan Resume With Payments to Afghan Taliban... Umar Patek: Indonesia’s 20 Year Sentence Versus One Errant Drone Stri...
Scroll to top