Did NYPD Manufacture a Murder Tie to Occupy Wall Street because Its Terror Myth Is Dying? 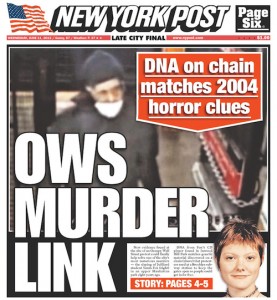 Let’s start with this. NYPD got its ass handed to it yesterday.

Specifically, Justin Elliott provided the definitive debunking of Mike Bloomberg and Ray Kelly’s repeated claims that their multimillion dollar Muslim profiling program has done anything to thwart the 14–or rather 3–terrorist attacks on NY since 9/11.

That wasn’t the end of the ass-handing, though. After Elliott’s piece, NYPD’s spokesperson Paul Browne started trolling Elliott’s comments, pretending the NYPD hadn’t repeatedly claimed to have stopped 14–or rather 3–terrorist attacks with their vast counterterrroism apparatus.

Elliott debunked that, too.

And Ray Kelly? He hasn’t been seen to ask him about this ass-handing; maybe he was crying in a bar somewhere?

Meanwhile, last night, during the All Star Game, a new myth started.

Starting with NBC, followed by a slew of other predominantly NY outlets, the press reported a flimsy story–sourced to law enforcement–claiming that DNA found on a chain left at an Occupy-related protest earlier this year matched DNA found at the site of a murder of a Pretty White Woman. Most of the stories didn’t include a caveat until the last paragraphs of the story that there’s no evidence suggesting the DNA belonged to any of the people who left the chain.

There’s no immediate evidence that the DNA belongs to the protesters who chained open the gates.

And none of them pointed out that the chain of custody suggested by the stories made the evidence useless in a trial (NBC, though, noted that NYPD has a suspect whose DNA doesn’t match any of this).

In short, it was facially a ridiculous smear, leaked by law enforcement (cough, NYPD), made to suggest in the press something NYPD has no evidence for in reality–that OWS are murderers.

No one, by the way, led with what should have been the blaring headline.

In short, the press got their asses handed to them.

Just so the NYPD would have company, I guess.

But then, later today, the NYT (which has was slow in covering Ray Kelly’s Muslim profiling, but has pointed to other problems with Kelly’s NYPD), did some rather interesting reporting.

The DNA that investigators initially believed was recovered from skin cells on the slain woman’s portable compact disc player and from the chain found after the March protest came from a laboratory supervisor at the Office of the Chief Medical Examiner, the person briefed on the matter said.

“The O.C.M.E. tainted the samples and it was the O.C.M.E. supervisor’s whose DNA was on both,” the person said.

But Ellen S. Borakove, a spokeswoman for the Medical Examiner’s Office, said, “We’ve excluded all medical examiner personnel.” She added that the office was still working on the test.

Now, either something’s funky with this report, or this is a giant scam. After all, wouldn’t the match come from a database search? How would both samples–plural–be tainted unless they weren’t working from a database match but rather from some invented reason to check the DNA samples side by side?

I don’t know the answer to that, but this much we do know. The NYPD has been known to plant evidence before (in drug cases). The NYPD loves to engage in myth-making to justify its heavy-handed policing (not to mention its budget). And, the NYPD has tried to insinuate Occupy Wall Street were terrorists in the past.

Perhaps it’s time for the press who reported this so breathlessly to start reporting on the underlying cop-work here?

Update: Thanks to Jay Ackroyd for the photo.

tweets from our circle
emptywheel@emptywheelReally hard to see how Cooper let this in. How could emails from July 2017 affect a lie told in September 2016. Cl… twitter.com/i/web/status/1…30 minutes ago17 May 2022
emptywheel@emptywheelThis is great but raises questions why they didn't charge him. twitter.com/kyledcheney/st…33 minutes ago17 May 2022
emptywheel@emptywheelThere's a lot that's just plain wrong in this post by NYT--including that Glenn Thrush still has a job at the NYT.… twitter.com/i/web/status/1…49 minutes ago17 May 2022
bmaz@bmazRT @CJMordock: My brother with his cable news debut tonight on Fox News.1 hour ago17 May 2022
bmaz@bmazYeah, but Rusty is on the other side. Let's see what plays out. twitter.com/ProFootballTal…1 hour ago17 May 2022
bmaz@bmazRT @Johnson_DavidW: @bmaz 14 weeks of fre class; 3 hr section on bar exam; years of application in courtrooms under live fire; but nah, if…1 hour ago17 May 2022
Ed Walker 🍞🌹💉💉@MasaccioEWRT @VirusesImmunity: It’s time to invest in next generation COVID vaccines that not only prevent severe disease but also block infection an…2 hours ago17 May 2022
RayneToday@raynetodayThinking about "asset harvesting" and the so-called Trump Muslim Ban. politico.com/interactives/2… pic.twitter.com/mwTTYSTyBf5 hours ago17 May 2022
Jim White@JimWhiteGNVThe beautiful cathedral here is named for St. Severus. Surely not Severus Snape? pic.twitter.com/jTswUzRD558 hours ago17 May 2022
Jim White@JimWhiteGNVGoodbye Cyprus, hello Germany. Strange changes happened mid-route on the train, and we wound up on the wrong side o… twitter.com/i/web/status/1…2 days ago15 May 2022
Jim White@JimWhiteGNVVery pleasant final breakfast in Cyprus. Strolling saxophone. And then the champaign came out… pic.twitter.com/yLIVs02GHL4 days ago14 May 2022
DIA Failed to Protect Jose Padilla’s Welfare Obama Brings Bankster and Oil Curses to Burma
Scroll to top